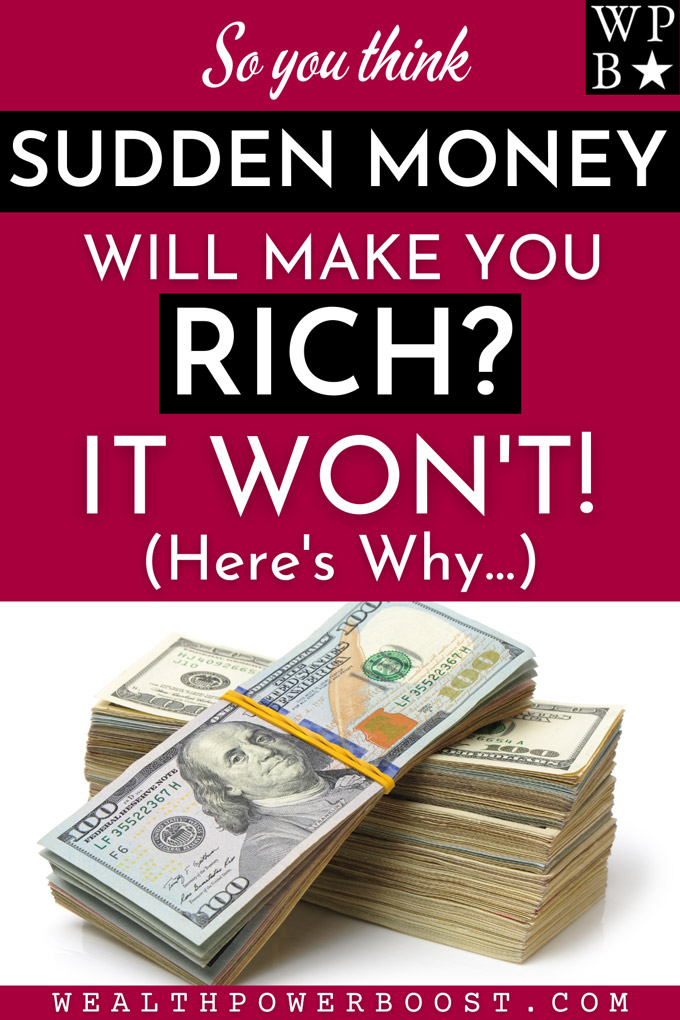 “If I were to win just ONE MILLION DOLLARS, I would NEVER be broke again!!” — Anonymous blog comment #1.

“If I had 317 mil. who cares about financial planning…? That’s enough to keep me well lit up for several generations.” — Anonymous blog comment #2.

“Those who solely by good fortune become princes from being private citizens have little trouble in rising, but much in keeping atop… unless… those who unexpectedly become princes are men of so much ability that they know they have to be prepared at once to hold that which fortune has thrown into their laps, and that those foundations, which others have laid BEFORE they became princes, they must lay AFTERWARDS.” — Machiavelli, “The Prince”, 1513.

Let’s kick this off with an extraordinary FACT: Nearly 80% of lottery winners lose all the money.

This figure is staggering! It’s so surprising that it begs further investigation. Think about it – we’re not just talking about a few careless spenders, we’re talking about the vast majority of the winners – from all walks of life!

Even to those who believe that their lottery win has given them such a huge pile that they couldn’t possibly run out.

Most people truly believe that a big cash jackpot will simply set them free, permanently. They also think that they have enough of a head on their shoulders to know exactly what to do if they “get money”. Most people, in fact, think that all they need is a big enough “score”, and then they will be “done” – and that it will all be Ferraris and Pina Coladas from that day on.

But there is a huge clue hidden here into the process that’s at work, into the “law of money” – and into the way many people simply have it wrong. It’s one of the big secrets of wealth.

Why do so many sudden money winners lose it all?

The answer is simple: It’s because having some cash and being wealthy are not the same thing. There is a subtle-yet-huge difference between wealth and money that causes all sorts of confusion at first, yet is essential to clear up.

The Difference Between Money And Wealth

With true wealth, money is just the “visible” part of the structure, much as the sparkling front window of a store is the part seen by the window-shopper. There is a huge infrastructure of business, skills, knowledge and other assets hidden behind that window – and with true wealth, the real business that generates the assets takes place somewhere much deeper inside.

You might even say that the problem with winning the lottery is that people are given money without being given wealth. There’s nothing to sustain it: No profit generating systems, no knowledge – none of the essential inner assets that are the actual foundations of wealth. And we know what happens to a building without foundations, don’t we?

However that “material world” is entirely the result of inner forces – the qualities that generated it. Understand this, it’s so very important!

An astounding fact that demonstrates this further is that many lottery winners do not just end up with no money. They often end up with enormous debt and huge problems – way bigger than they had before they won the money! It is as if the trickle of “continual loss” they were experiencing before, of money flowing away from them, becomes a tidal wave – and it washes them away.

They did not develop the suite of assets, both inner and outer, and the asset management skills that you need in order to become and stay rich. And they broke the ultimate formula: Right from the moment they won the money, they immediately started spending more than they were earning. They never really became “profitable people”. They think their money makes them immune to loss – and the speed at which the money evaporates is absolutely unbelievable.

Wealth Magnifies The Person But Doesn’t Change Them

Having a big windfall simply magnifies the volume of existing cashflow, rather than changing its direction. If a person is already prone to having all their money evaporate, if they already spend it all until there is none left every time….. a large windfall will typically cause them to make a larger amount of money evaporate, much in the same way. They will most likely lose big – and fast!

Being rich does NOT mean simply getting such a big pile of cash that you can then spend fearlessly.

It’s a hugely important point to grasp. Wealth is not dictated by the amount of money you are suddenly handed. Wealth is created from within. The direction in which wealth flows is the thing that will decide whether you are rich – and this in turn depends absolutely on who you are – your inner qualities, skills, abilities and what actions you are habitually taking. Wealth is not something you can simply “go and get” like someone gets an object from a store. If someone is broke, handing them a big sum of money will in most cases not make them rich. They will in all likelihood continue to be the person they were before, only on a bigger scale – and end up broke again quite quickly.

On the other hand, if a person knows how to produce wealth and is already creating wealth, handing them a big sum of money will be far more likely to enable them to create more wealth.

There’s little point in “getting rich” if you end up losing it all: Andrew Whittaker, Jr. was once handed a check for over US$113 million, after taxes, for a famous lottery jackpot win. Four years later he barely had enough to cover his expenses. He stated that the money had completely destroyed his life – and that if he could live that fateful day all over again, he wouldn’t bother buying that lottery ticket.

Wealth Is Not An Object, It’s A Way Of Being

Wealth is not a thing to own. It is a way of being to embody. I know this may sound metaphysical at first but it is not some weird, vague new-age idea. That’s not what I mean at all. What I mean is that material wealth really is a by-product of what is going on inside you, of your abilities, and of the habitual actions that you take.

Money is not wealth, it is a by-product of wealth.

Getting sudden money can throw people’s lives into turmoil. Everything changes. Where you can go, what you can buy, what you don’t have to do any more, the kind of people who take an interest in you, the amount you spend, the new possibilities for escapism… and intoxication… People new to money have little experience in managing money. Large-scale investment and asset management are new to them, and it is incredibly easy to lose money if you are inexperienced. With many millions, a person’s opportunity for self-destruction, as well as their opportunity for prosperity and profit, is amplified. If you suddenly get a lot of money, not only will you have to fight any demons you have, that suddenly grew to full size… but you will have to fight the demons of those around you also.

The mindset often changes to one of carelessness. “Oh it doesn’t matter” they say after a few mistakes, “There’s more where that came from” – and so they lose it… gradually…. or not so gradually. Instead of the loss of a thousand dollars being considered a serious event, which it used to be, they no longer perceive this loss as so serious – and so they are less careful. And being less careful is a sure fire way to lose the money. Whether you are a millionaire or not, the loss of money should be held as enough of a significant event to motivate you to care.

Many people who fantasize about being rich, actually want to be protected from their lack of financial skill and from their inherent laziness – which they think a large cushion of money will do.

A lot of money will not protect you from a lack of financial skill for very long. Using money this way is like thinking “It’s ok to drive way too fast without knowing how to drive – because I have an airbag! A huge airbag! I don’t need to worry.”

The airbag might stop you from getting killed – but you still wrecked the car. And once you deploy it… it’s gone. You need another one. Like a pile of cash, it gets used up saving you from the consequences of unskilled action… and you are back where you started… only this time with a headache and legal bills. It’s time to get wise.

The ULTIMATE FORMULA For Getting Rich (And Staying Rich)

Top 15 LIFE SKILLS That Will Pay Off Forever