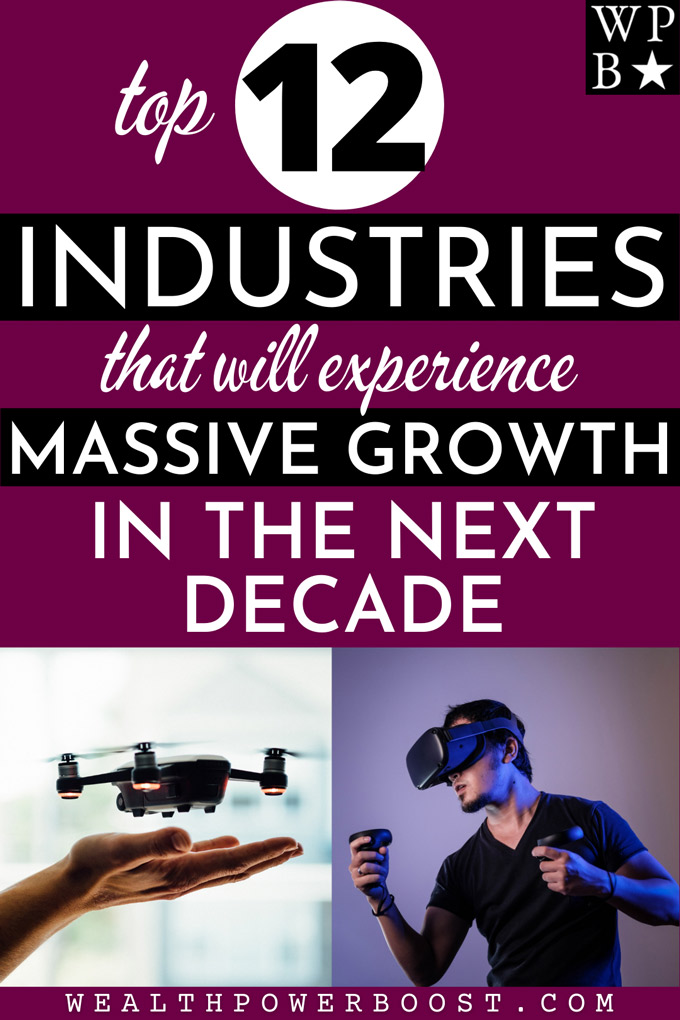 The high-tech sector of the economy is often seen as having the most potential for future growth due to its continuous development of products and services that change the way people live, work, and play. This sector has emerged as the hotbed for technological trends and breakthroughs that are also driving growth in other industries.

Make a note of this list of industries that will benefit from advancements in technology and are expected to explode in the next ten years. The serious growth expected from these fields will provide opportunities for consumers, businesses and investors.

1. The Internet of Things (IoT)

The “Internet of Things” is the collective name given to objects of all kinds that connect to wifi / internet networks and transmit and / or receive data. Examples of IoT objects include “hue” lightbulbs, wifi-enabled security cameras and “Alexa” or similar devices

Many people are familiar with “smart home” devices such as lighting and security systems that can be controlled via smartphone apps – however this is just the tip of the iceberg. The IoT is exploding – with the number of IoT devices increasing 31% year-over-year to 8.4 billion in 2017 and the trend expected to continue: IoT is predicted to have a compound annual growth rate of 34.2% from 2022 to 2030 ( https://www.grandviewresearch.com/industry-analysis/iot-device-management-market. )

Interoperability is one of the main issues holding back growth in this field. [2] There are also security obstacles to overcome, as such devices are notoriously insecure – in great part due to end users not understanding and utilizing security settings. However the opportunities are vast both for new smart devices and for novel ways to organize and use the data they transmit.

The IoT industry is expected to refocus on interoperability, greatly expanding the number of directly compatible devices. An article in Forbes magazine predicted that IoT adoption and spending would reach $267 billion by 2020. [3]

This area of technology is expected to become commonly seen in homes and workplaces in the not so distant future. [4] Commercialization of 3D printers will allow consumers to select and create the items they want, powering them to personalize clothes, jewelry, and various hardware items.

A sharing economy is a network in which people are able to either provide assets for others to borrow / rent, or be the one borrowing / renting. The internet has paved the way for websites that act as networks for these kinds of transaction. Some of the pioneers in this industry include AirBnB, Uber, and Snapgoods. The huge growth of sharing economy businesses is driven by several factors including social media, urban lifestyle, and peer-to-peer social commerce. American consumers’ robust appetite for the services provided by the sector is evident in the percentage of US adults who have engaged in a sharing economy transaction, according to a PWC report. [5] Nineteen-percent of total US adults have engaged in sharing economy’s transactions in retail, hospitality and dining, and automotive and media.

The market is definitely ready for AR and VR. The Oculus Rift VR headset was the real game-changer and was very positively welcomed by consumers. Thousands of VR games and apps followed. Another big story in the industry wass of course Pokemon Go, the infamous location-based augmented reality game developed by Niantics. VR/AR are more than just for gaming though – and have further potential applications in education, entertainment, fashion, military, engineering, media, and film.

Machine learning is a type of artificial intelligence that has made massive strides forward in the past few years. Computers use statistical analysis to ‘improve’ ways of doing things. Applications of machine learning include for example email filtering, optical character recognition (OCR), bioinformatics, computational anatomy, affective computing, and object recognition. [6] Machine learning is already used ubiquitously to select the contents of your news feed and to remember advertising preferences in order to improve advertising performance. It is expected to become more integrated into improving public safety, improving medical outcomes and strengthening cybersecurity.

Advanced technologies are enabling the automation of innumerable tasks previously done by humans. Automation and robotics are scaling rapidly and are poised to be a highly influential factor in the global economy. Some of the most promising robotic and automation technologies include 3D printing, agriculture, manufacturing and autonomous vehicles. We are all waiting for the housework droid but it won’t be too long now. It is interesting to note that AI and robotics are now predicted to generate more jobs than they are set to replace. [7] some of the recent advancements are quite amazing; this video gives a few ideas on the recent progress.

“Big Data”, for all its recent controversies, has enormous potential to benefit us. Large-scale data gathering and processing can help us in everything from planning better medical treatments and designing better traffic control systems to developing better marketing campaigns. New technologies will find novel ways to gather, store, process and interpret the ever-growing information stream – applying the qualitative to the quantitative. There will certainly be unintended consequences as more and more information becomes available – in terms of both what is revealed about us and who has access to the information. But Big Data is here to stay and presents us with huge opportunities to solve some of our most pressing problems as it enables us to know things that were simply unknowable in previous times.

Smart wearable technology is opening new health frontiers and will play a prominent role in healthcare transformation in the near future. Wearables come in many forms including watches, shirts, shoes, eyeglasses, belts, and headbands. They have found their way into varied medical applications such as fitness tracking, continuous monitoring and diagnostics, and therapy. They will continue to evolve as advances in technology provide experience-based applications for clinicians and patients.

Digital technology plays an important role in the transformation of the hospitality industry. It has a major impact on the entire consumer lifecycle, from booking to the on-site experience and checkout. Hotel operators need to respond to evolving customer needs by integrating commercial systems platforms, cross-channeling customer experience optimization and integrating online and offline customer relationship management.

We have seen the spectacular rise of solar power in the last few years, with advancements in technology driving down the “cost per watt” and bringing solar into true competitiveness with other electricity generation methods – especially with the recent spikes in oil price! Various countries are jumping on board in a big way: India reported plans to boost solar capacity in the country to 100 GW by 2022. [8] It is predicted that these advancements will continue. Offshore wind power is an interesting field, beginning to take shape as a developing market. Further advancements in battery technology (such as the fabled solid-state battery) and other aspects of power generation will increase cost effectiveness and competitiveness.

Fully self-driving cars could be on American roads within a few years. While Tesla has been leading the field, other automobile and tech manufacturers are working hard on their solutions. Companies such as Nvidia, BMW and Google have demonstrated autonomous driving demos. These companies are collaborating with other companies in the software, telecom, automotive sectors to develop and implement autonomous-car platforms. Autonomous vehicles have the potential to revolutionize personal mobility.

Growing demand from the commercial and civil government sectors will push the opportunity for drones which are forecast to have a market growth of 57.5% CAGR from 2021 to 2028. [9] Commercial drones in the U.S. are currently limited to a select few sectors including agriculture, mining, and oil and gas. Collision avoidance systems and “geo-fencing” (limiting the drone to a set area) are important areas of development that are required to make flying drones safer and will make regulators feel more comfortable with – opening the field to a wide variety of industries.

[4] Alexandru Pirjan and Dana-Mihaela Petrosanu. 2013. Journal of Information Systems & Operations Management . The Impact Of 3d Printing Technology On The Society And Economy
ftp://ftp.repec.org/opt/ReDIF/RePEc/rau/jisomg/Wi13/JISOM-WI13-A19.pdf

These Are The 50 Apps & Tools That Helped Me Build A $1.9M Internet Business