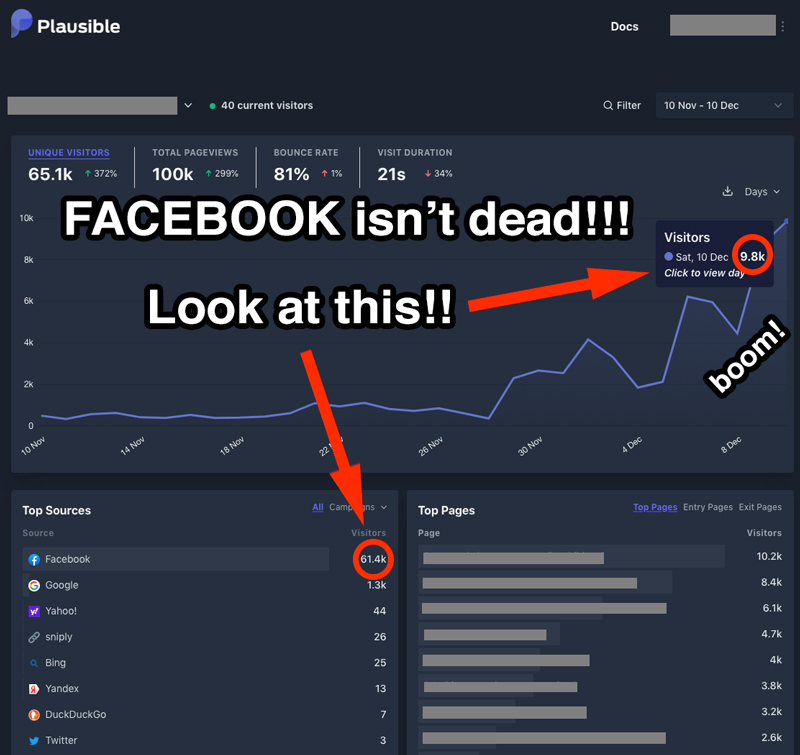 This is 100% organic traffic (zero advertising spend) to one of my old blogs that I had, to be honest, ‘put out to grass’. I haven’t added any new posts to the blog for about 3 years – and I left the best of the content “on loop”… autoposting on Facebook using the awesome FPTraffic app, which allows you to recycle your content infinitely.

Looking at the 12 month chart, it looks even more dramatic: 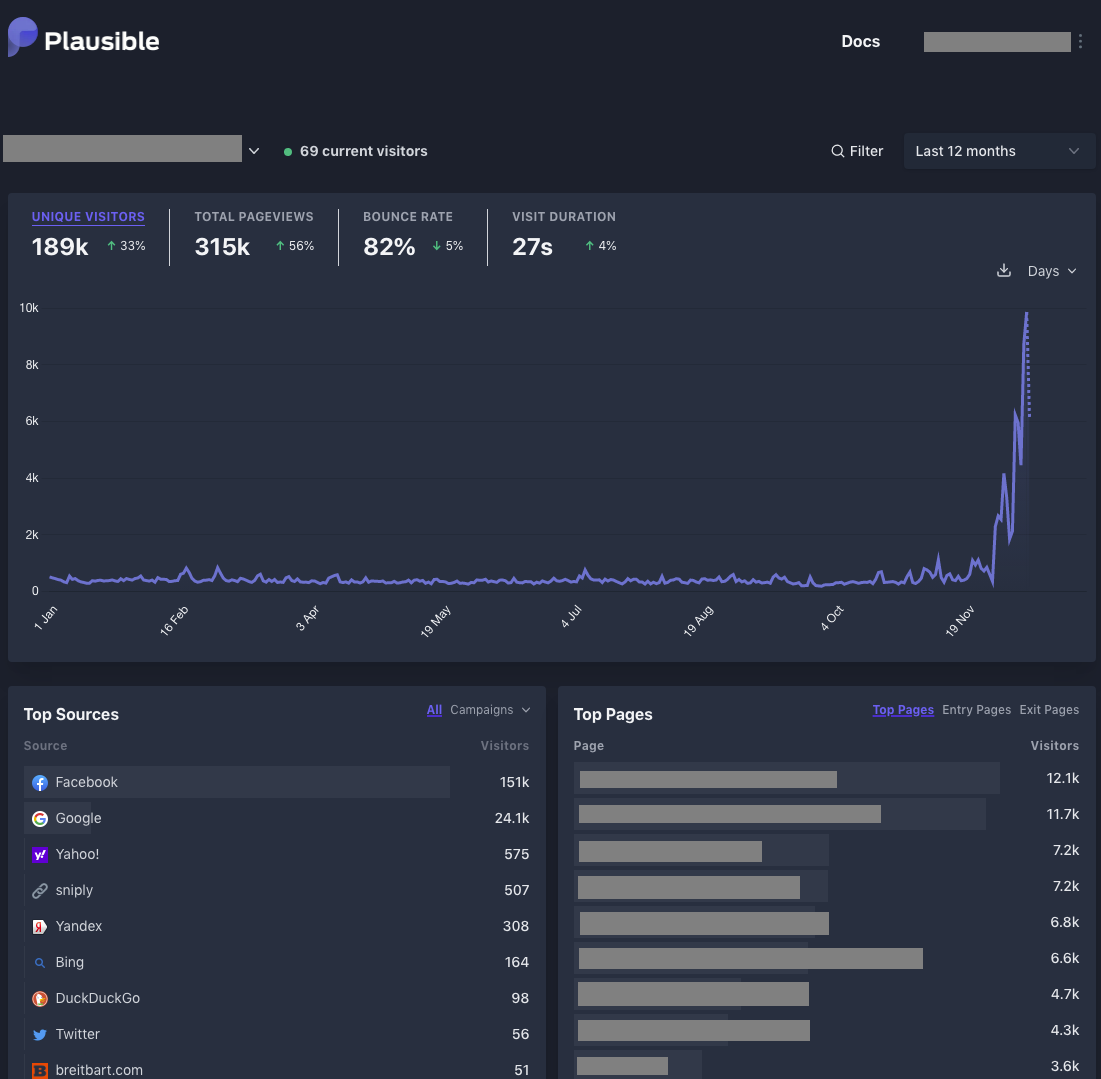 What’s remarkable here is that I didn’t do anything. But clearly the reactions to my posts gave the algorithm a nudge, because it suddenly decided to apply a site level modifier to the edgerank of links pointing at that one particular website – regardless of which Facebook fan page was posting the links. My other websites were not affected.

Another interesting chart: This is the graph for one particular URL: 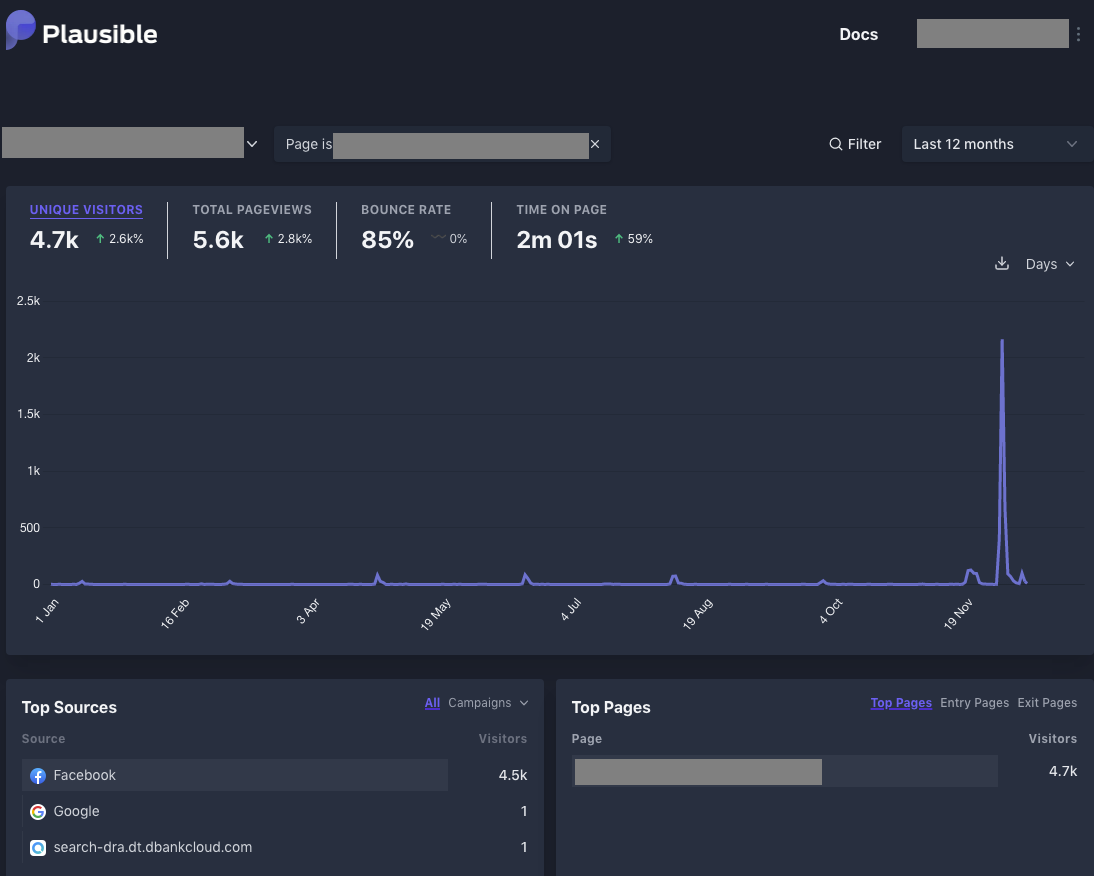 You can see the small bumps every time that link gets posted in my automatic content cycle. And then – strangely – the same link, posted when the site-level modifier is active, gets a huge lift. This is how it is with the Facebook algorithm “gear changes”. They aren’t small. They are huge force level multipliers!

There appear to be three types of modifier (aka boost aka bonus) that the algorithm can apply. I know, this is getting a bit nerdy but stay with me because once you get this, it’s a big deal.

These modifiers seem to be able to multiply – a bit like “doubles” in Mahjong – and if you get all of them.. you get truly INSANE traffic.

Fanpage modifiers are the most powerful of all (and the least understood) – and they influence the entire trajectory of a Facebook page. I’ve cracked this – here’s how it appears to work:

The Life (And Death) Of A Facebook Fanpage – Demystified:

Have you ever noticed that when you “like” a Facebook fan page, you see all their stuff continually for a while… and then… one day you notice that FB has stopped showing it to you. You think “huh, does that page still exist?”, you go and check and sure enough, they are still posting. You just aren’t a fresh fan any more and so you got dropped.

So now picture that effect on an entire audience. When a page is new-ish, most of the fans are still engaged and so the overall number of reactions to posts are strong relative to the audience size. Facebook thus rewards the page with big visibility and recommends it to new fans (discovery).

However once your Facebook page becomes old, even a very successful one, most of these fans from the viral growth phase are now old fans and FB has stopped showing them all but your best stuff… which means your overall post reach drops, which signals to the algorithm that this page ain’t all that hot… and the next thing you know, your fan page growth suddenly stops completely… and your overall engagement dwindles to a fraction of what it used to be.

One you get dropped from recommended pages, which appears to be a very “binary” process, you find that your page’s growth stops – very suddenly. At that point, it’s extremely difficult to get it back into a viral growth phase – because your old, unengaged fans are now “dead weight” – screwing up your numbers. Honestly the best thing you can do at this point is put your content for that fan page on loop and start a new fan page, using all your best tactics to blow it up and ride that viral growth phase all over again. This is how the pros do it.

You can observe these effects by looking at other random FB pages. Run a search on a popular keyword, set it to show pages, go count their number of likes, then look at the page a few days later. You can see in many cases, even the “old warhorse” pages such as 5 Minute Crafts, with 67 million followers, just isn’t growing any more. Check for yourself!

This is because it has been dropped by the algorithm. It’s no longer a recommended page.

So this probably happened to your Facebook page… and you thought FB was dead, right?

It’s just that most of your fans are not being shown most of your stuff – and it will remain ever thus, unless you really hammer it with strong, fresh posts, combined with all your best old viral ones – which can get things fired up again (sometimes, for a brief period).

Yes, the algorithm can get re-ignited on an old page or with an old website, as my traffic charts above show.

Around Nov 30th I noticed that traffic had bumped up on that domain. Going to check my FB pages, sure enough a few of those posts were getting traction. And yes this is old posts from years ago that I have run probably at least 30 times!!!

So once I saw that posts from that particular site were getting picked up and that FB had decided “this website is hot”… I started pounding my big FB pages with all my best artillery.

BOOM. I just got nearly 9.8k visitors in one day!

That printed me a nice little stack of Adsense revenue – not insane – but not bad considering all I did was drop a few posts on FB, which took me a few minutes, while I was working on one of my new blogs.

It’s an exciting time when this happens, because there are further “gears” to this Ferrari. It can go super crazy. Like someone hit the warp button and the horizon just melted type of crazy. I’ve had viral cascades where FB sent over 300,000+ visitors in one day. Yes really.

When it happens, my income from those days is always somewhere in the four figures. I hit refresh and watch it pile up while I’m sipping coffee and grinning. 🙂

It’s crazy how you can run a viral post over and over and over again on Facebook (I am giving you the gold here) and it still performs better than new content that is less powerful.

You learn that a viral post is a viral post, and that so long as the subject matter is evergreen, it will be just as good next year as it was this year.

Proving the point – I dug out one of my old viral posts from 2013 a couple of days ago and it got over 1,600 shares. Make the most of the boost while it’s on and run all your best stuff – because it probably won’t last (and running your best posts will not only help you get paid, but help keep the algorithm juiced up!)

The algorithm is a very hungry beast. I need more viral posts. So do you.

How To Make Viral Posts:

To crush it on Facebook all you need is enough viral posts.

But that’s the difficult part, because that “secret sauce” it takes to make a viral post is difficult to achieve consistently.

Chuck enough arrows at the dartboard and you’ll get one.

But your best bet is to back-engineer the viral posts of other pages. The ones that blew out of the water compared to the other posts in their stack. Then attempt to figure out what it was that made it pop – and then don’t steal the content but apply that science to your own posts.

Even then, not everything you do will knock it out of the park. You’ll see this: 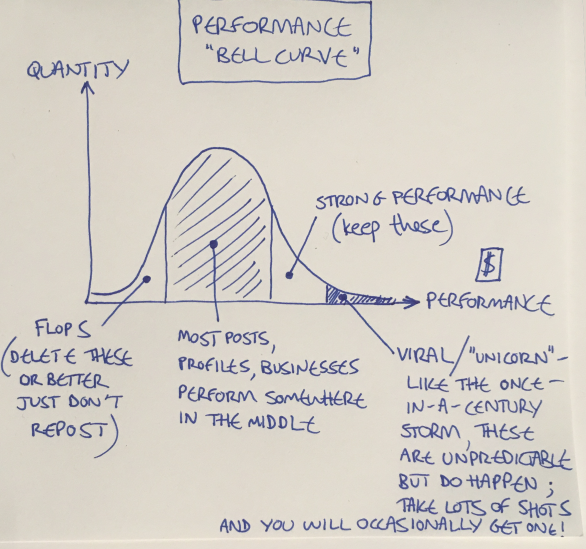 It took me about 100 posts before I got my first one that really popped compared to the others. I learned from it – and gradually improved my skills.

Keep taking shots! After making literally thousands of posts, keeping the winners and either deleting or revamping the losers, I now have a whole stack of strong posts. Heavy hitters that I can deploy at any time. 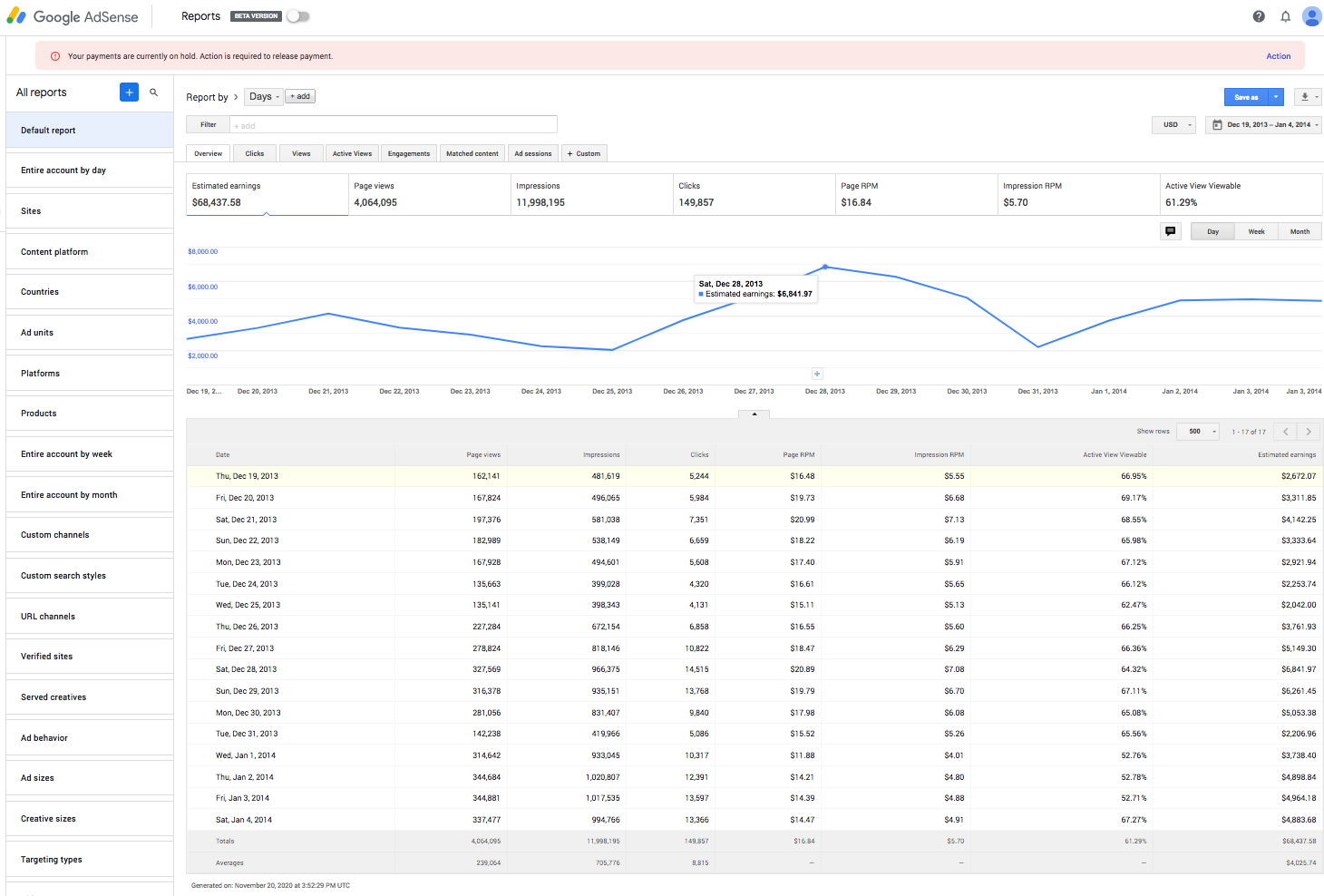 Proper money. Ever seen your Adsense look like this?

(By the way, you’ll need dedicated web hosting once you are into six figure numbers of visitors per day – even VPS gets killed by that kind of traffic, as I found out! 🙂 )

But.. But.. But.. Facebook is DEAD! Someone said so!! Nope – Facebook Still RULES social media and can still send server-melting traffic!

Ad revenues, in terms of both clickthrough rate and earnings per click, are way down from what they used to be, but Facebook is still the 800-pound gorilla of driving traffic. Pinterest is nice, but I’ll bet you none of these Pinteresters has had 300,000+ visitors in one DAY from Pinterest. I’ve done it several times – including in 2020.

Looking further into Facebook, we can see that despite the flack that everyone gives ole’ Zuck, FB still gets more users than all the other social media sites by a country mile:

Over 400 million MORE users than Tiktok and Instagram COMBINED!!! Let that sink in!

2.958 billion monthly logins. Does that seem like a dead site to you???

Think about that. All those people are looking at something. Something is going viral. Just not your posts 😉

I can teach you how to both blow up new pages and re-ignite your old pages. I’d advise you do both.

What I have given you here is the tip of the iceberg… you need to learn viral images, viral captions, how to balance link and image posts in your stack.. and much more.

2) Start making viral content and building up a stack of winning posts, images, headlines, captions, emojis… all of it. Find other FB pages that are killing it and learn as much as you can about their strategies. None of it is an accident. Winning on social media requires ninja skills and a deep understanding of what spikes people’s emotions, makes them click and makes them want to subscribe for more.

3) Give MORE value for free than seems right. Give so much to your audience that you start thinking “I really shouldn’t be giving this much away for free. This is wrong.” Yes, you should be giving that much away for free. Do it. Go nuts. Get the audience. Get the audience. Win them over through simply having the better biscuit than your competitors. Get the wow reaction. Then get it again. And again. Then when you have the audience, you can keep on promoting stuff to them over and over and over again.

SO that traffic graph at the top of the page? That was driven by two big OLD Facebook pages that I built in 2012! Those pages are still printing me money on pretty much total autopilot in 2022 – and every so often the algorithm still ignites – as an be seen.

An old page can still experience viral cascades if you do everything right. New pages have the biggest potential, however. There are lots of new pages that are in the viral growth phase. And you can start new pages today.

ps. My traffic graph is courtesy of the awesome plausible.io analytics, which you should be using (no affiliation, they are just fantastic). You still use G.A. bro???

How To Get Your Blog APPROVED For HIGH PAYING Ads (Do These 12 Things!)