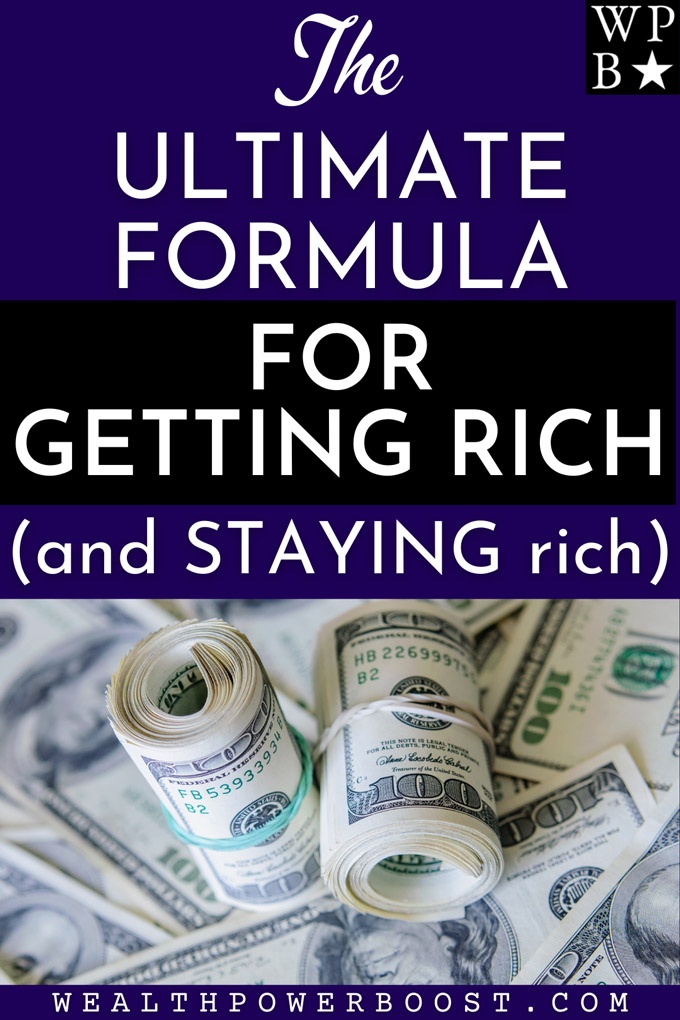 The ultimate formula for getting rich, once truly grasped and understood, holds absolutely true.

It is so very easy to state – and is so simple that it almost sounds like a joke. And yet so many either do not know it, do not understand it, are not willing or are not able to practice it.

It’s easy… are you ready? The ultimate formula for being rich is this:

You have to earn more than you spend.

It doesn’t sound like any sort of great secret at all, does it?

It sounds like stating the obvious – but hold it right there. This little statement in fact goes against the way most people think, act and believe!

Most people want to get rich so that they can spend more money. Of course! But the fact that they want to spend their time spending money is one of the key reasons why they are not rich.

They already spend all they have and if they got more, they would spend that too!

In order to be rich, you have to make money faster than you spend it – not just for a moment, but you have to continue to do so.

How can you do so if spending it is more of a priority for you than making it?

Many people fantasize about “getting rich” so that they might then proceed to spend more than they earn; and continue to do things much the same way they did them before, only without it mattering how much they spend any more.

They imagine that “getting rich” is a momentary event, rather than a continued direction of monetary flow. Such dreams of wealth revolve around shopping and acquiring lifestyle, rather than around creating and maintaining an operation that continues to generate resources.

And so, even if they manage to pull off a score, it doesn’t last very long.

Nevertheless, they think they will be different from the others and tell themselves that when they get money, they will be able to control their spending and make the money last.

But they already spend everything they have. They are more interested in spending than in earning! And so guess what?

They burn right through it. Spend it all.

Even if it’s 100 million dollars… numerous lottery winners have proved this and continue to do so.

If you already spend everything you have, what makes you think that earning more will change anything? You absolutely WILL burn through it just as quickly. In fact, it will be worse – because your “perception” that “I have money therefore I am rich” will lead to impulse spending and poor choices – which are classic ways to become broke faster.

A “bigger” lifestyle leads not only to purchases but to a massive increase in monthly overheads. Often people who double their income suddenly find that they have tripled their bills – with the bigger house, increased credit limits, new car and so on.

Can you double your income?

Very good! But can you double your income without doubling your spending?

You’re not alone. Most people can’t. The trouble is, when the income drops back down again, the expenses stay double (big house, higher overheads etc). You end up selling it all again and find yourself back where you started (if you are lucky).

If it’s any consolation, most people do that…

So there are two “ultimate keys” to this game:

1) Most people think being rich is about spending more money. It isn’t. It’s about making more money. Most people want to be rich because they want to spend more money. But the TRUTH is that in order to get rich you truly have to be more interested in making money than in spending it. Watch for that key shift!

2) There are 4 ways to spend your money:
a) On necessary expenses and bills.
b) On “stuff” that is ultimately unnecessary
c) On things that continue to cost you money
d) On things that make more money.

You should be able to intuit what the rich spend their money on. Exactly. They spend it on things that make more money.

So let making money become not only your business but your hobby. Use your money to make more money, instead of buying “stuff” or further liabilities…

There Are Only Four Ways To Make Money In This World. Here Is The One You Should Be Doing