This website is not medical advice. Posts may contain affiliate links from which I earn commissions at no additional cost to you. 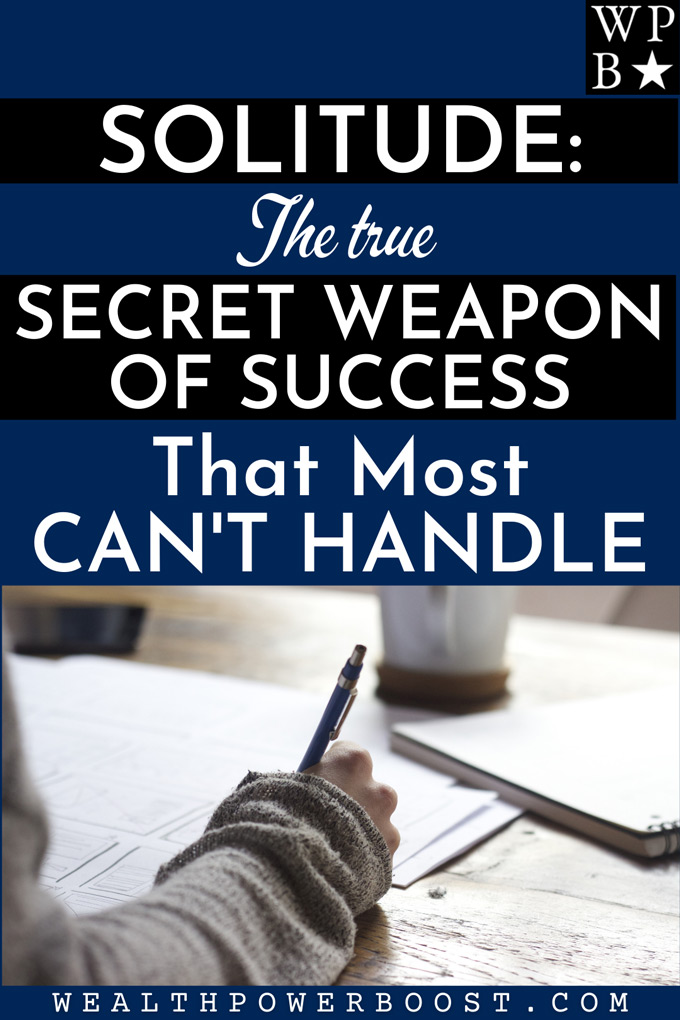 I was amazed and disappointed that the first time I posted this motivational article that supports the dreams of the visionary… on FB… the post got banned very rapidly.

But these are true facts. It’s almost as though, above all things, your autonomy is the one thing they cannot afford… 😉

And this was one of my favorite posts to write. There’s a piece of me in this page and I hope it speaks to that part of you, too.

Now this article is bound to be controversial because solitude is very unfashionable in the 21st century. Also many people find solitude challenging – and so there are many who will not want to accept this truth.

However I’m not shooting in the dark here. If you study the history of the world’s most successful people, you will find that it is an extremely common trait of their success: They chose to spend a great deal of time alone, working extremely hard.

From mountaineers to concert pianists, from entrepreneurs to athletes; the winners are those who are prepared to keep going when others stop.

And that means going on alone.

One of the most famous exemplars in recent times is of course Elon Musk, the multi-billionaire who chose to spend his 47th birthday alone, working an astonishing 24 hour shift at Tesla Offices. “All night — no friends, nothing,” he said. He claimed he had been working 120 hour weeks of late and had not taken a weeklong vacation in almost 20 years.

He’s absurdly rich. If he had wanted to, he could have had a party for five thousand, with good champagne for all, lifestyle selfies for Instagram and surrounded by fawning admirers.

But would that have gotten him closer to his true goals? No.

He has the option to be a socialite but it is simply irrelevant to him.

Not only was he willing to keep pushing when all others had run out of steam – but he more than likely chose to be alone so that he could think with absolute clarity. Hard work is very often best done in solitude – because solitude eliminates distraction.

You are not there to have a party, look good or to try to impress people. You are there to improve, to reach your goals, to learn, to reach your full potential.. to win! You cannot be doing that while you are chatting with others or too worried about getting your hands dirty. Will you achieve greatness if you go home because everyone else is packing up and going home? No. Those who achieve greatness are the ones prepared to stay after everyone else has gone.

What matters to you, really?

“The fight is won or lost far away from witnesses – behind the lines, in the gym, and out there on the road, long before I dance under those lights.” – Muhammad Ali

We are in the business of becoming champions and where do we find the champion? Out there alone on the track, in the rain, doing that which others cannot do or will not do.

That’s the stuff that winners are made of. It’s interesting that people think that winning is done in front of the cheering crowd – but the real success takes place in the opposite environment. When it is you against yourself. Running on rain-sodden streets when nobody else is watching…

If you want to be incredibly successful, one fantastic step you can take is to learn to love your own company. It’s a beautiful thing.

In ancient times, isolation did not always carry the negative social stigma that it has today. It was more commonplace in a less populated world without modern transportation – and was also often seen as admirable. Religious traditions regarded it as a vehicle of spiritual transcendence: Monks willingly accepted long periods of asceticism – deliberately spending time in hermitages in order to meditate and train their minds.

Adventurers discovering new lands might spend weeks alone in the wilderness. And prior to modern transportation, international or long distance travel was a rarity. Most people stayed in the same place for most of their lives.

However in modern times, self-isolation has unfortunately picked up a negative connotation: Society brands you a “loser” if you are not in the middle of a grand social circle, surrounded by adoring fans. You are deemed “insignificant” if you do not have a hundred thousand followers. People will literally evaluate whether you are worth talking to based on how many followers you have! It’s happened to me! I can’t be bothered with my personal Instagram. I have deliberately made zero effort to gain followers and never link to it. I like being invisible, as you can tell. It’s almost amusing that when they dismiss me, they have no idea that my brands have 4.5 million followers – virtually none of whom know who I am.

It is ironic to say the least that those who reach fame most often spent long hours or even years in isolation in order to achieve it. To them, Instagram is the enemy! They are not even on there – because they have better things to do! Think about your favorite author, musician, sports person. Their fame is invariably a result of willingly imposed self-isolation! They were prepared to push everyone away with a clear goal in mind and focus absolutely 100% on the work that needed to be done.

The amusing irony here is that those who are most comfortable with this, who are the most introverted in one sense, can often achieve the greatest fame.

There are bound to be times of loneliness on the road to greatness. But don’t be afraid of it. Concentrate on moving forward, one step at a time, doing that which needs to be done. That is all that matters. If you can stay the course, you will get there.

You can see now that society and the “herd” can have a negative effect on those seeking success. Society unconsciously “homogenizes” people – encouraging people to be like the others.

Winners have to cut loose from all that. Ask any winner if they agree!

It is certainly advisable to choose your company well – which means having firm boundaries around the company you keep.

A final great tip is that you can surround yourself with the great minds of all time by starting (or continuing) to build a library. This is a fantastic way to “keep the company of the greats” at all times.

Hopefully this piece has helped you overcome any fear of loneliness and gain valuable inner strength to keep pushing on, fearlessly, as your own best friend and ally. All the reserves of strength you need, you have within you. You can always count on yourself. Draw on your inner fire and fight on. You are unstoppable.

How To Change Your Mental Diet For Massive Success

16 Signs You’re Going To Be Successful