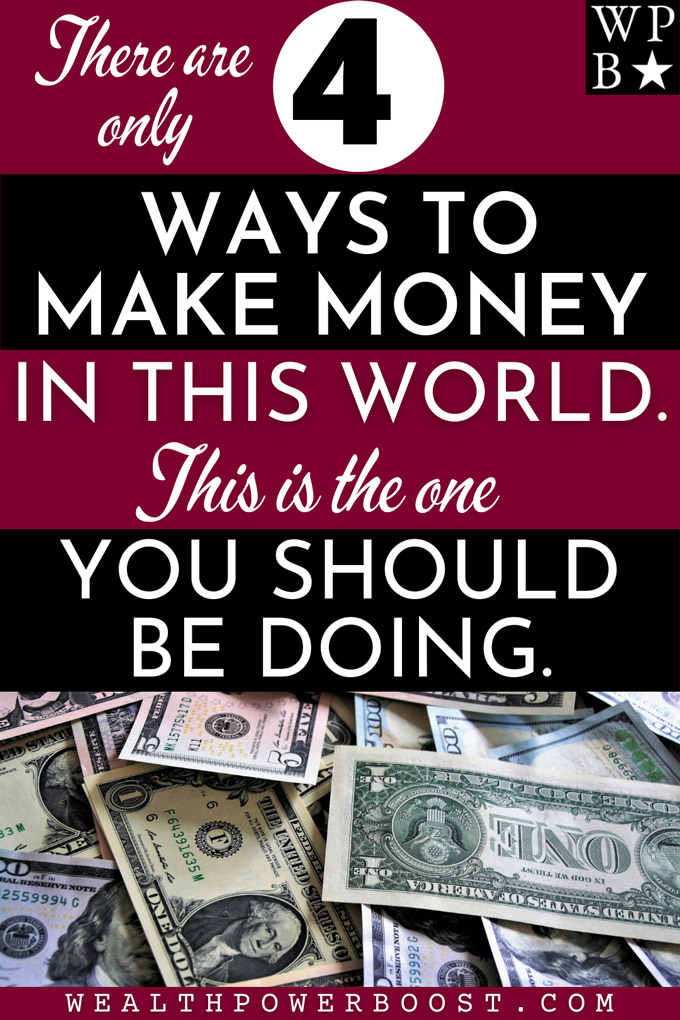 There are just four fundamental ways to make money. The rest is details.

I know. It sounds over simplistic; but I guarantee that this interesting viewpoint will set you on your correct path to wealth.

Observe any money making method in the world and you can put it in one of these categories. But only one of them should be followed. If everyone in the world did this, we would arguably have far fewer problems to deal with. Ok, let’s get down to it. Here are the four archetypal ways of making money:

Imagine if Apple created a crap iPhone that didn’t work. The apps crashed when you tried to load them and the buttons fell off. But then they pleaded with you to buy it because they needed the money.

Do you think anyone would buy it??

Of course not. The phone sold by the million because of its awesome design, functionality and advanced features.

An extraordinary number of people play the sympathy card in one form or another in order to attempt to get what they want. It may work, sometimes, and it may even be “necessary” for some… but it is not a great strategy. Now there are of course people who genuinely deserve help and care, but those who have reached adulthood yet are young, healthy and able bodied, should not be attempting to appeal to sympathy in any way whatsoever in order to get money. First – because why should someone else work hard so that you can benefit without contributing value? Also, appealing to sympathy can become a kind of dependency. You appeal to sympathy, you get what you want, and then the habit becomes ingrained and you don’t develop skills, so you end up with fewer options other than to… appeal to sympathy all over again. It’s essentially a childish habit. But the final result of this piteous course through life is that you would become a skilled manipulator who is always dependent on others. You would become ever more needy until you decide to either change or die. There, was that dramatic enough? 🙂 Second, appealing to sympathy makes you a nuisance. If you don’t contribute value, people would rather be rid of you than associate with you. It’s harsh but let’s be honest, it’s true.

Remember Machiavelli’s maxim to “appeal to their self-interest, not to their sympathy”. People as a general rule are interested in what’s in it for them.

This word summarizes the practice of obtaining money by some form of deception or forcefulness. Now at least with sympathy, the other person has the opportunity to say no, but the criminal does not give that option. Whether it is by falsifying scientific research in order to sell pharmaceuticals, or by robbing old ladies, the principle is the same and relies on a disregard for the welfare of the other party. Extortion is for losers and ultimately fails because selfishness eventually brings about the doom of its perpetrator – either through legal consequences, revenge or both. You may think that piling up gold is all that matters, but even if we disregard the consideration of morals, this is a strategic error. The reason is simple: You do not want to find yourself in a position where people would prefer you were dead than alive; and this is the end result of extortion. Think about it.

Now of course you can make money this way. But let’s be honest, it is parasitic. You do not create anything of value:

Whether you are working the casino, the Forex markets, flipping real estate without improving it, or some other form of arbitrage, the principle is the same: You are extracting wealth from the marketplace by exploiting price differentials. You are moving money from one place to another. But you are not actually generating value. Your gain is someone else’s loss. You are not making the world a richer place.

Now of course it is popular – because it can be highly lucrative and “fast money” is always going to be desired by many. But there is a dark side to this form of wealth acquisition: You don’t improve. Your self-development in critical areas stops. It also leads to a cynical outlook – as illustrated so superbly in the Wolf of Wall Street scene.

As the saying goes, even if you win the rat race you are still a rat.

Note of course that value investing is different. In this case, you buy stock in order to invest in the future of a company; their stock offering gives them working capital to expand and to create things that have value for others. Your investment is enabling prosperity and growth. This leads us neatly on to #4…

If you create something that is extraordinary, better, faster, cheaper, innovative, helpful and so on, you will have customers. The premise is simple and follows the maxim laid down by Zig Ziglar: “You can have anything in this world that you want if you give other people enough of what they want”.

But what does it take to create value? The first step is to become valuable yourself. Skills, knowledge, work ethic and other virtues are required in order to create value for others. So it is necessary to “invest in yourself” first and put in the diligence.

This process of investing in yourself the right way leads to a harmonious life and it leads to your star rising. As you develop yourself you become more valuable to those around you. People want to deal with you, and your abilities grow. It’s the true win-win and if everyone operated this way we really would be living in a better world.

Excellence, as was said by Aristotle, is not an act but a habit. So the time to start… is now.

Top 15 LIFE SKILLS That Will Pay Off Forever