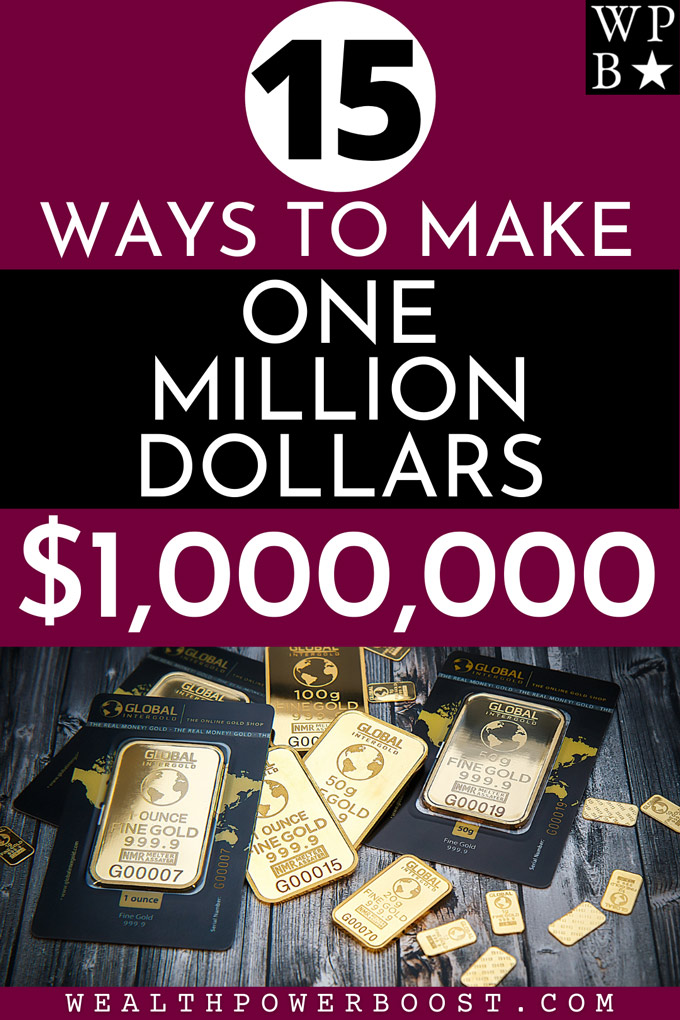 Over 1,700 new millionaires are created every day! Here are ideas for 15 Ways To Make One Million Dollars courtesy of the indomitable Alux.com to get you going – together with my commentary.

Related Post: 25 Problems To Solve That Would Make You A Billionaire

Doctors, lawyers and management typically earn six figures – however this is a long apprenticeship. A faster track is sales – if you really know how to sell, you can overtake these salaries. Recommended books: The 10X Rule by Grant Cardone and The Sales Bible by Jeffrey Gitomer.

2. Instead Of Trying To Write One Mega-Bestseller, Write Several Books That Sell OK.

Hitting it out of the park with that one bestseller is elusive and of course, not many achieve it. However, a successful writing career is more achievable if you have several books. Increased sales of one often lead to increased sales of another. An interesting fact I learned from this is that selling around 10,000 copies will make you a New York Times bestselling author! Far less than I imagined! And be aware that as an author you no longer need to rely on the old-school publishing houses: Kindle publishing can make you a millionaire.

3. License A Patent Or Trademark To A Big Company.

The example given in the video is astonishing: The inventor of the super soaker earned over 100 million dollars licensing his invention to Hasbro for a 3% royalty on every unit sold. Understanding patent law and how to protect your intellectual property is key here.

4. Start A Dropshipping Company Under Your Own Label.

The internet is swarming with these now – typically using either Shopify or Fulfillment by Amazon. There are lots of them because it’s working! Tapping into this now-huge online global marketplace gives practically unlimited potential.

6. Save Money Aggressively And Funnel It Into Index Funds For Several Years.

A 7% annual return is not extraordinary these days and you can reach your million through the power of compound interest. Saving a mere 10% of your annual income from an typical working wage of $50k per year with 7% interest will bring you to your million in 40 years. You want to get ahead? Target 20% savings or even more aggressive numbers. Grant Cardone recommends saving 40% of your income, citing this as “paying yourself first” and keeping an iron rule of doing this BEFORE concerning yourself with money-wasting items like new cars. Paying yourself first in this manner is a key wealth strategy.

Also recommended is to earn more (of course) and to target investments with higher returns. The S&P 500 is the one recommended, with an average 10% return over the last 90 years. Recommended book – Money – Master The Game by Tony Robbins.

This is essentially a form of crowdfunding – where a company creates a blockchain-based service and sells a token in order to raise capital. This strategy has worked for numerous companies due to the enormous potential of cryptocurrency to achieve spectacular gains if things go well. Many are willing to purchase for example $1000 of an initial coin offering because of the huge potential upside. Works best during “bull run” (runs on a 4 year cycle) and of course there is the potential for loss as well as gain.

8. Purchase A Franchise And Make It Really Successful.

This one is hard work for sure. The advantage of this strategy is that the business model already has a proven track record of success – you just need to execute with excellence. Such businesses typically have simplified operation systems that are ‘part of the deal’. You get the existing branding, all the tools and the ‘recipe book’ of how to run the business.

That would generate a million in one year. is is a very popular business model now, for good reason: It works. The beauty of a subscription service is that you achieve recurring revenue. So instead of a single purchase, you now have an ongoing customer with a much higher lifetime customer value.

10. Work For Someone Who Is A Multimillionaire Or Billionaire.

Revenue from youtube videos is quite variable but it is estimated that you need somewhere between 500 million and a billion total views to earn a million dollars in Youtube ad revenue.

12. Have A Blog That Gets Over 41 Million Views Per month

Having made almost $2M blogging – I think their maths is way wrong: If you are getting $10 eCPM ad revenue (not impossible at all with layout optimization and a high paying ad network) then you need a total of 100M pageviews to reach your target, so this could be 8.33M per month to do it in just one year (278K per day, which is a freaking lot for a blog). Of course also you have to scale from zero to there – so you probably won’t do it in your first year. There is also customer retention (i.e. email list subscribers) to factor in.

13. Make An App That A Million People Use. This is do-able, when you consider that the meditation App “Calm” has now been valued at 250 million dollars. There are of course two ways to profit – one from purchase of the app, the other is from in-app purchases or advertising. So there are different potential models here. A free app will generally get a lot more users and so this might be of value if the app can generate additional revenue. Recommended book is How To Build A Billion Dollar App – George Berkowski. Berkowski was founder and CEO of King Digital, the company that create Candy Crush. So he has actually done this!

This is an estimated figure based on typical results. Twitch is a live-streaming platform with subscription fees that are split between the streamer and the platform. Another revenue stream comes from additional donations and a third is sponsored placements – as people are always willing to pay for visibility.

Buying and selling – trading – is of course probably the world’s oldest business model. This is typically done by either a) leveraging price differences in different markets, or b) by adding value to purchases so that they can be resold at a higher price.

20 Important Technologies Of The Next Decade To Study (Huge Profit Potential!)