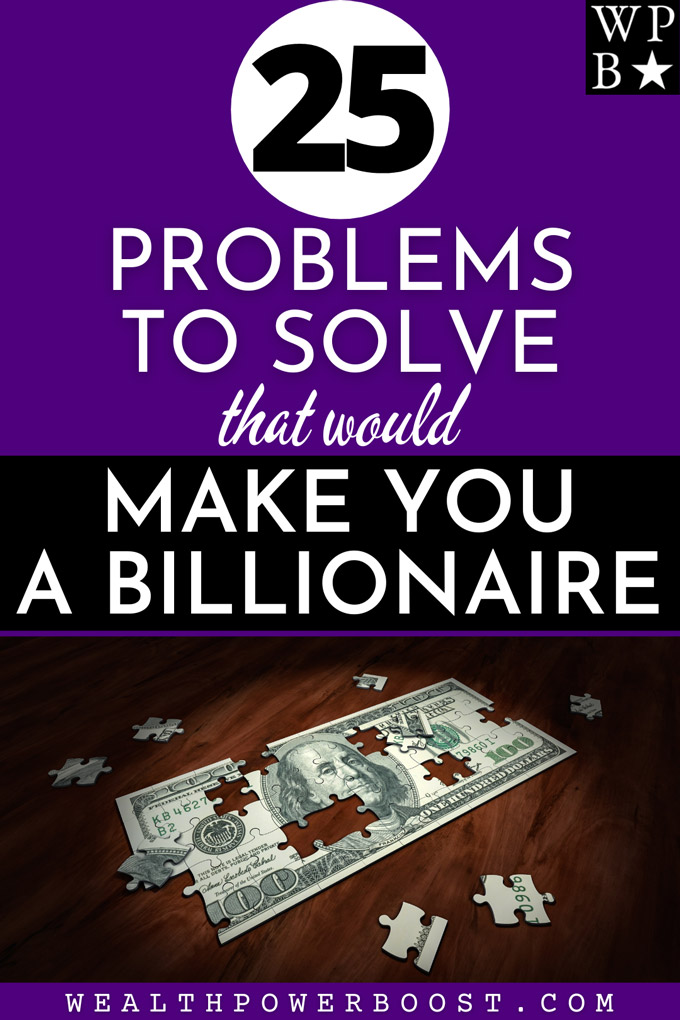 25 Problems To Solve That Would Make You A Billionaire Graphic © WealthPowerBoost.com. Background photo – Pixabay (PD)

In essence, you surround yourself with the greats and learn from them. In addition to a physical diet (the food you put in your body) we also have a mental diet. This is the information you consume daily. Is it healthy and nutritious? Or do you feed your mind on McFacebook and McSoapOpera? 😉

I actually believe this to be extremely important in life. What your mind consumes will dictate your level of advancement through life and also possibly affect your mental health. Feed your mind with the most brilliant and elevated ideas of the greatest people. Bin your TV and start building a library of knowledge. You want your mental diet to be of the ideas, thoughts and concepts of those who have most successfully done that which you are aiming to do. Just by surrounding yourself with excellence you will absorb a lot “by osmosis” – and the saying that your wealth is the average of the 5 people closest to you has a lot of truth to it.

The very best way to get rich is to solve the biggest problems. Attempting to gain wealth through craft and cunning, though perceived by some as a ‘fast track’ is beset with problems and tends to create enemies and opposition – not something that you really want. A great number of those who have generated extreme wealth have in fact done so by identifying and solving issues that are faced by large numbers of people. Want to get rich? Start helping people on a large scale.

I came across an interesting video from Alux, which lists 15 potential routes to being a billionaire. One for the swipe file! This video gave me a shot of inspiration and is actually very good:

I think, however, that we can take their 15 ideas and go significantly further – so I added 10 more.

Here are the 15 ideas mentioned by Alux:

16) Reliable Cures For Any Of The World’s Major Diseases

As the world grows more crowded and more polluted, as junk food is manufactured for shelf appeal and long storage life rather than optimal nutrition, humans are becoming more sick. Many of the world’s worst maladies – Cancer, diabetes, heart disease and so on, are already multi-billion dollar industries. Perhaps one of the most challenging and difficult of all fields – but a noble cause worth giving your life to and one with unlimited potential.

Or, come to think of it, any other system that can reliably make people significantly more physically attractive. The beauty industry is absolutely enormous and people will spend whatever it takes to be more gorgeous. Existing methods of plastic surgery are still risky and impermanent, and skin products, while they will help, cannot ultimately prevent the march of time. If you can cure the wrinkle, you will be among the world’s richest.

Despite all our advances, our death-too-soon is still an obstacle that we have been unable to overcome, adding at best a few years to our lives. If you can patent the medicine to significantly slow down or even halt the aging process, that could be a not just a billion but a trillion dollar fortune.

Henry Ford became the world’s richest man by manufacturing an automobile (previously a luxury item) that was affordable to the masses. Bill Gates did a similar thing with Microsoft and the computer. And Steve Jobs did it for the touch screen smartphone. What’s next? The home robot seems the obvious contender. If you can create a robot that enables you to party like it’s 1999, leave all the dishes in the sink, socks on the floor, pizza crust fallen down between the cushions on the sofa – and head out for the day… then return to a spotless house with the droid plugged into its charging unit and greeting you in a friendly voice… the world is yours, my friend. I’d buy one TODAY!

What I mean by this is a next-generation recycling plant that breaks items down to their constituent elements – or at least to pure compounds that can be returned to industry. If all our trash could be reliably and profitably collected, processed and purified back to the constituents needed to make new products – you would not only be a billionaire but also a global hero, of the kind who has a bronze statue in the capital city of their home country. The trash mountain is only getting bigger and we need innovative solutions here, big time.

Well, this one might be on the way. SpaceX’s Gwynne Shotwell recently (May 2018) gave a TED talk discussing using rocket transport for international travel, going for example from LA to Singapore in 30 minutes. They are claiming this will be a reality within a very few years. They are also working on Hyperloop and Boring Company tunneling systems. If anyone can do it, Elon and team can.

Terraforming is the creation of habitable environments where there was only inhospitable terrain before. This technology ultimately holds absolutely unlimited promise. From the deserts of earth to the icy plains of Mars and beyond, there is limitless barren real estate waiting to be turned into hyper-valuable real estate – for those who are able to solve the problems of large scale climate and resource management. Something for the latter half of the 21st century and beyond…

Many do not know that the mosquito has caused more human deaths than anything else in history – due to the diseases that they carry such as Dengue and Malaria. Many hundreds of thousands of people per year still die from Malaria right now *cough* more than are predicted to die from gl0bal w@rming by the end of the century *cough*. Some people are working on this problem but it sadly does not get as much attention as it should: Call me cynical, but maybe it’s because most of the victims have poor socio-economic status? Mass pesticide dumping is a horrible idea (did we not learn from “The Silent Spring”?) and should be superseded as quickly as possible. Fortunately (for us) there is some progress in this area: Mosquito Laser is a fascinating project that has achieved some results but is facing the challenge that some of the most problematic areas are also some of the poorest countries. The people who need the most help here are not necessarily the people who can afford this kind of advanced laser technology, but mosquitos and their problems are worldwide; so this is still an arena with massive worldwide potential.

The world has an enormous problem with counterfeit goods, which cause losses in the billions to creators of legitimate products. From iPhones to designer watches, children’s toys to rare old coins, items are being faked on a mass scale. A reliable identification system for genuine goods is required; one which would enable provenance to be established in the complex global supply chain. Some fascinating progress is being made in this regard by blockchain startups such as Provenance and Waltonchain.

If we can successfully create and sustain a fusion reaction, harnessing the available power, this will in theory solve all our energy problems, facilitating a great expansion of wealth and resources of all kinds.

Just for fun – if you can figure out how to send real pizza down the internet, a billion dollars awaits you. Actually wait, that could be a trillion dollar fortune, forget asteroid mining. 🙂

There are of course tons more. Free energy, ultra-fast transportation by air, land or sea, the gravity well problem (being worked on by SpaceX)… in general, anything that would solve a large problem faced by a large number of people is up for grabs. Can you think of any more we should add to the list? Let me know in the comments.

Top 10 INTERNET MONEY Ideas & Techniques For 2022 (This Is What Is Working Right Now!)