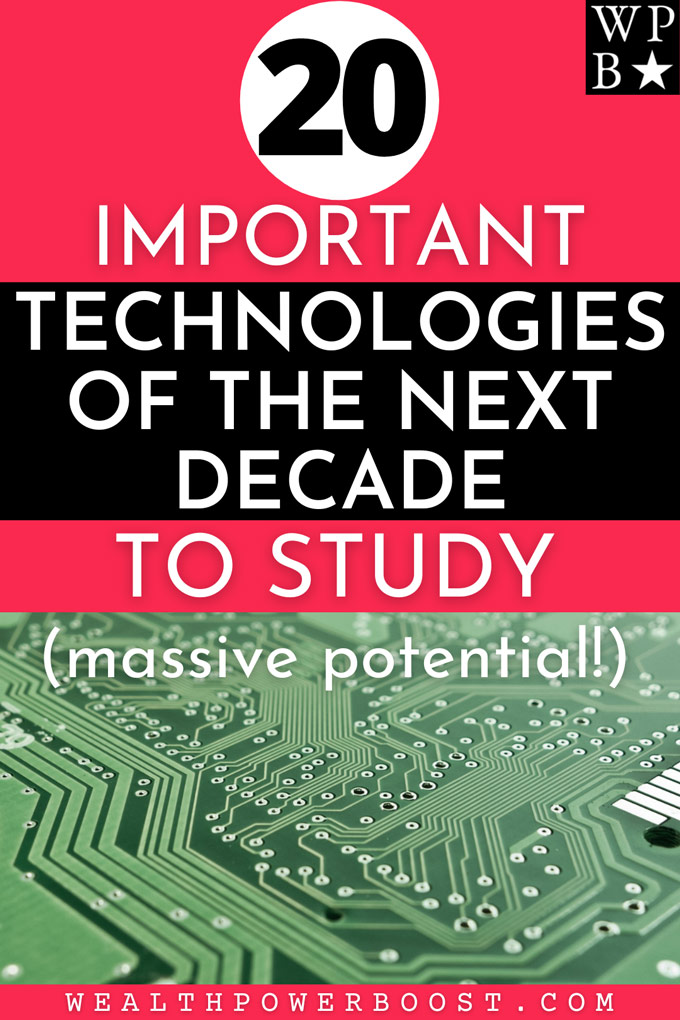 Your choice of what to study can be one of the most important choices you will ever make.

One of the challenges nowadays is that rapid changes in technology mean that what you study now might be completely obsolete in ten years. You might also be ignoring something that has monumental potential.

As the saying goes, it is advisable to skate not to where the puck is but to where it is going to be.

I write from experience. Quick background story: I am the same age as Elon Musk, and I was an 8-year-old school-kid in 1980 when we got the first computers at our school. The “BBC Micro 16k” used a cassette to store and load its software: It did not even have floppy disk, let alone a hard drive! However a voice in my head said to me “This computer stuff is going to be important. This is the future.” Like Elon, I too wrote my first piece of software at the age of 10. It was a program for rendering the characters of the Greek alphabet, which had to be coded as binary numbers in order to create the character from a grid of pixels. It was a single information page with a three-column table – displaying the Greek letters, their English equivalents and their names. It sounds primitive, but in 1980 this was an innovation as far as our school was concerned; I had just designed a font, pixel-by-pixel, on a computer that had no fonts other than the one used for basic alphanumeric characters! I won the computer prize that year.

However unlike Elon my life took a completely different course. Whereas in his case he continued his computer studies, worked his ass off and developed his skills to a high level, I was influenced by my peer group to give it up. By the time we were 13 the ‘computer kids’ were bullied… and I didn’t like that. I was scared of getting punched by the jocks and I wanted to be one of the cool kids. Peer pressure took over, I turned a blind eye to computer stuff for a couple of decades and ended up doing all kinds of other things, some of which I am not proud of.

Fast forward to the late 1998 – I was just getting back into computers – and launched my first website in 2000. By that time, Elon Musk and his team had launched the company that became PayPal. In 2002 they famously sold PayPal to eBay for $1.5 billion; and Elon’s personal proceeds from that acquisition were…. $180 Million.

Hopefully this gives you some idea of how important it is to study the right things! I can’t of course guarantee that I would have achieved success on his scale, but I do know that I completely prevented this from happening by deciding to IGNORE my intuition and stop studying what I KNEW was going to be important.

What a massive mistake that turned out to be! In terms of financial loss, this could easily be regarded as the worst decision of my life. The second worst would be buying a house instead of Bitcoin in 2013-2014 – after my first big “home run” with internet business. That money would now be worth over $100 million.

Enough musing, here is my take on where the puck is going to be in the next 10+ years – supported by data from Grand View Research and Startup Genome:

The controversial A.I. is in a huge growth phase and set to become one of the most significant technologies of the future. According to a 125-page report by Grand View Research, the global artificial intelligence market is predicted to have a colossal annual CAGR (compound annual growth rate) of 38.1% per year from 2022 to 2030! Reference: https://www.grandviewresearch.com/industry-analysis/artificial-intelligence-ai-market

The Internet of Things (IoT for short) consists of internet-enabled objects of all kinds, which are able to transmit and/or receive data from a network – opening new possibilities for advanced systems, data collection and organization. The IoT is actually made up of numerous technologies including machine learning, data analysis systems, commodity sensors, embedded systems, wireless sensor networks, control systems and automation (including home and building automation). This is going to be absolutely huge, a world changing technology and is just starting to gather momentum: IoT is predicted to have a compound annual growth rate of 34.2% from 2022 to 2030 ( https://www.grandviewresearch.com/industry-analysis/iot-device-management-market. )

According to the Startup Genome Project’s “Global Startup Ecosystem Report”, this is the #2 fastest-growing startup sub-sector in terms of “Early-Stage Funding Deals over 5-Years” (107.9%) It is widely believed that blockchain transactions will “replace” traditional forms of information recording and transfer in many sectors worldwide. Blockchain is expected to achieve colossal growth, with a predicted compound annual growth rate of 85.9% from 2022 to 2030: https://www.grandviewresearch.com/industry-analysis/blockchain-technology-market. An interesting sub-sector that jumped out of the research stats is Crypto ATMs, which are expected to grow by 59.2% per year. https://www.grandviewresearch.com/industry-analysis/crypto-atm-market-report

3D printing, also known as additive manufacturing, is a form of “on-demand manufacturing” that enables rapid prototyping and precision engineering developments in numerous fields as diverse as automobile manufacture, aerospace, defense, surgery and even food manufacture. 3D printing is predicted to achieve very solid and steady gains in market size, with an overall predicted CAGR of 20.8% annual from 2022 to 2030. https://www.grandviewresearch.com/industry-analysis/3d-printing-industry-analysis Some sectors however will achieve far higher growth: For example in the construction industry, 3D printing is expected to achieve a staggering 100.7% CAGR from 2022 to 2030! https://www.grandviewresearch.com/industry-analysis/3d-printing-constructions-market

More and more internet and phone use is mobile / wireless, replacing static devices and land lines. “Wi-fi everywhere” seems set to happen within the next few years, for better or for worse, and this will open even greater opportunities in this field. Mobile payments is a hot sector, with 35.3% annual growth expected from 2022 to 2030: https://www.grandviewresearch.com/industry-analysis/mobile-payments-industry

All new Tesla cars for example now have the hardware required for full self-driving. Within a few years many cars will be able to conduct complete journeys with no action required by the person “driving”. Drive on, computer: I am going to take a nap… 😉 The automated vehicle market size is expected to grow by 10.2% CAGR from 2022 to 2030: https://www.grandviewresearch.com/industry-analysis/automated-guided-vehicle-agv-market

This is one of the fastest growing startup sectors at the moment – with developments including hydroponics, closed loop systems, robotic / automation techniques, nutrient systems, indoor growing and of course the “evil GMOs”. Companies are working towards “labour-free agriculture”, where crops are grown from seed to harvest without human work and all the work being done by machines and robots. The European Smart Agriculture market has been studied and is predicted to achieve a compound annual growth rate of 10.8% from 2022 to 2030. https://www.grandviewresearch.com/industry-analysis/smart-agriculture-farming-market

According to the Startup Genome Project, this is the #1 fastest-growing startup sub-sector in terms of “Early-Stage Funding Deals over 5-Years” (107.9%). Robotics, it seems, is finally here. When we were kids we assumed that we would all have our own droids by now but technological advances in voice recognition, object recognition, 3D printing, manufacturing techniques and computation are bringing the ‘world of robots’ closer to reality.

Whereas Virtual Reality ‘surrounds’ a person with a completely artificial environment, augmented reality “blends” VR with the real world, “enhancing” real world objects with computer-generated perceptual information. AR will combine real and virtual worlds, enable real time interaction and will map / register 3D objects, linking them to databases. Augmented Reality is expected to grow at an incredible compound annual growth rate of 40.9% from 2022 to 2030. Source: https://www.grandviewresearch.com/industry-analysis/augmented-reality-market

Already in very widespread use in South East Asia, QR codes are set to become an essential part of everyday life in the rest of the world within the next few years.

2019 saw Google announce that a quantum computer has performed a task that would be “essentially impossible” for a regular computer. It was claimed that the sequence of instructions was completed in 200 seconds that would require 10,000 years for the world’s most powerful computers to achieve. Quantum computing is still in its very early days but the potential capability of this technology is game changing. One of the intriguing (and possibly alarming) aspects of this development is that quantum computers would be able to brute force strong encryption, which relies for security on the fact that the computational power required to crack its codes is beyond that of “ordinary” supercomputers.

Fifth generation cellular network technology is being rolled out all over the world and the growth trend is not expected to slow down any time soon, due to ever-rising demand for high speed data transmission. The global 5G services market is expected to show a mighty CAGR of 52% per year from 2022 to 2030. https://www.grandviewresearch.com/industry-analysis/5g-services-market

Voice control, interestingly, is predicted to become the primary interface for the Internet of Things.

Led by the well-known giants such as SpaceX, Boeing, Blue Origin.. this sector is making huge strides with numerous other companies springing up. Legal changes introduced by Trump have opened the opportunity for private enterprise to play a full role in aerospace and important future sectors such as asteroid mining.

“Big Data”, powered by increases in communication speed, has paved the way for a new subset of industries in data management, for example “rich data” which interprets information and increases its usefulness. This technology is obviously going to be huge in the coming years.

According to Grand View Research, the U.S. Print On Demand market is expected to grow by an annual 26.1% from 2022 to 2030: https://www.grandviewresearch.com/industry-analysis/print-on-demand-market-report

According to Grand View Research, the global NFT market is expected to grow by an annual 33.9% from 2022 to 2030: https://www.grandviewresearch.com/industry-analysis/non-fungible-token-market-report

This interesting sector is intertwined with A.I. and big data. Deep learning utilizes neural networks and training algorithms to process data and perform valuable data processing tasks without human interaction. Examples of deep learning tech include image and speech / voice recognition, translation and the dreaded “chat bots”, which while often “painfully stupid” at the present time are gradually improving and are set to become highly important. Deep learning is undergoing very rapid growth, with predicted compound annual market growth of 34.3% or higher from 2022 to 2030. https://www.grandviewresearch.com/industry-analysis/deep-learning-market

Last but not least, the Metaverse sector is expected to achieve absolutely monumental growth in the next decade. Metaverse is a term used to describe an immersive digital environment which uses virtual reality / augmented reality. It’s essentially an extension of the internet and utilizes a virtual world in which business, social, gaming and other activities can be conducted. According to Grand View Research, the Metaverse market is expected to grow by a mighty 39.4% per year CAGR from 2022 to 2030: https://www.grandviewresearch.com/industry-analysis/metaverse-market-report 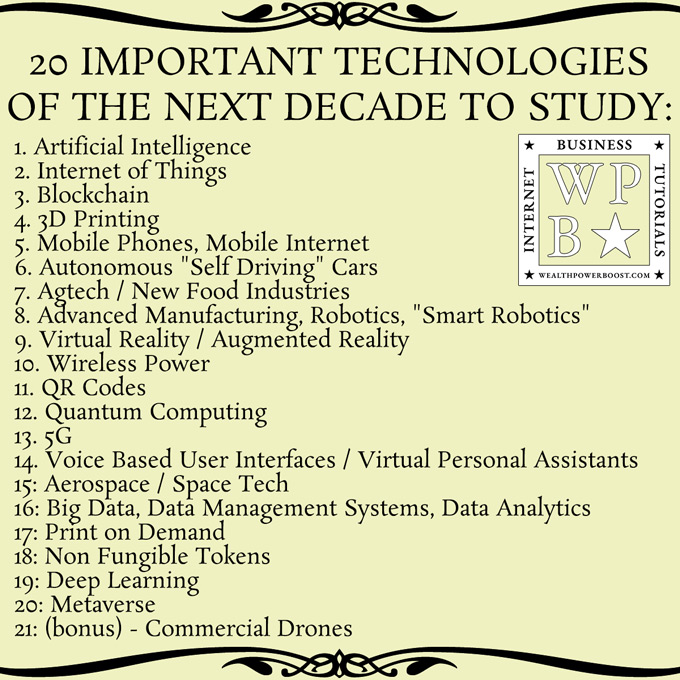 25 Problems To Solve That Would Make You A Billionaire