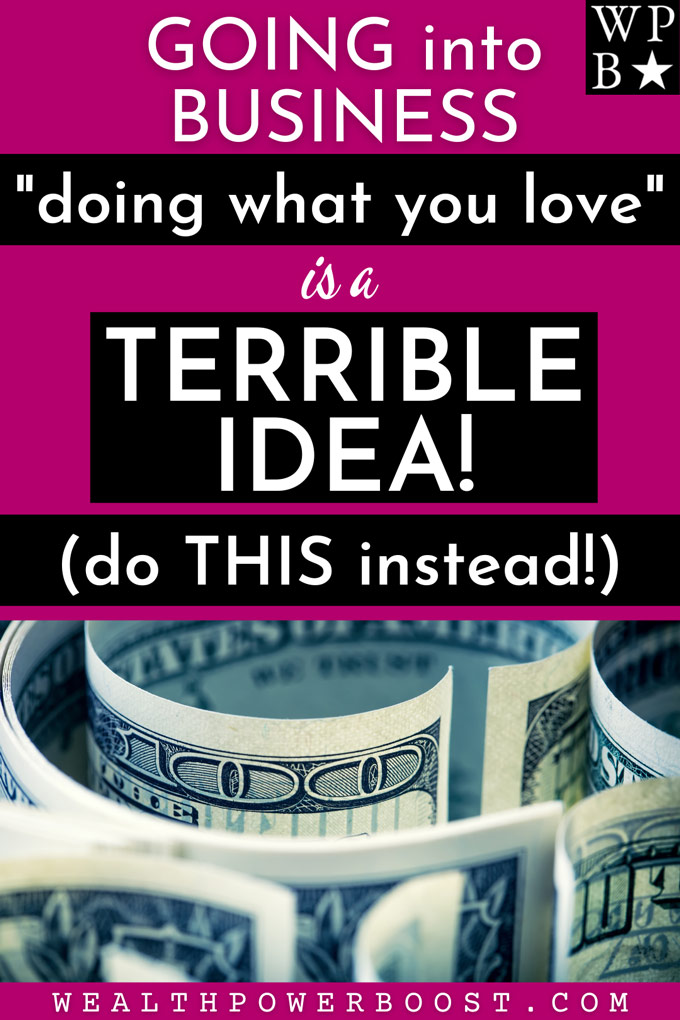 Nobody wants to hear this. You probably hate me already. But this post could save your butt, so take a minute to read it. I’m going against the grain for a very good reason. Are you ready? Here goes…

Q: Why is going into business doing the thing you love a terrible idea?

A: Because NOBODY CARES!

Do you buy a product because the person making it was following their dreams, or do you buy it because it serves YOUR needs?

It’s Not About You

I can almost hear the wails of protest! But I do NOT AGREE AT ALL with the old saying “Do what you love and the money will follow.” It’s a false axiom made by people who need to tell themselves something comforting while they avoid doing the kind of work that is going to lead to actual results. It misleads so many people.

Remember also the old saying “Where there’s muck, there’s brass.” There’s a lot of money to be made doing the stuff that others don’t want to do… and plenty of boring-but-well-paid jobs out there; such as accountant, air traffic controller, claims investigator, database architect, gastroenterologist, mortgage loan officer, orthodontist. And whether you are working for yourself or for someone else, this principle holds true.

In other words, if you want to do something fun, go play with your kids. Work is work.

Of course, there is some crossover between hobby and profit – but far less than you would think. Making a lot of money is in some ways a fundamentally boring process, so get used to it! 😉 You have to work hard when others are relaxing, and be prepared to take on challenges that others would rather not.

It is of course VITAL to take pride in what you do; to pursue excellence and focus on the benefits you are creating in the world by your actions. But if you want to be rich, you should be prepared to put profitability first, and instant gratification second.

It’s essential to have a clear head when investigating the potential of an enterprise, and to do that which is most likely to get results, rather than that which seems like it will be a fun ride. In most cases, when people do something because they love it, it does not make much money – and the parts which make the money are the boring parts! You went into it thinking you could just ‘do your thing’ all day long and suddenly find there are half a dozen other jobs that need to be done.

You quit one job and took on six more!

But the world loves feelgood stories – and the idea of “living your dream” has mass appeal of the kind that sells self-help guides by the thousand.

Efficiency is awesome, effective delegation is awesome… but since when did anyone actually create anything worthwhile on four hours per week?

It’s true that loving what you do really helps motivate you. But it only has value if the thing you love happens to have a revenue model and profit potential which you actualize!

Work means doing some difficult things – but it is nonetheless important to do something you believe in. There’s nothing worse than doing something for profit which you disagree with in principle; which you know in your heart to be wrong. It either has the effect of making you feel bad about what you are doing, or (worse) makes you rearrange your values in order to suit the life you have chosen. This often happens to people without them realizing it has happened.

So the choice of what you do is very important. Choose something you believe in, but let it not be your hobby or fantasy unless that happens to have a demonstrable revenue model with genuine potential to be extremely lucrative.

The entrepreneurial seizure is a nickname that was given to the fantasy of deciding to be your own boss, stick it to the man and start a business “following your dreams”.

It’s been described as the predominant reason why most small businesses fail.

Those gripped by the entrepreneurial seizure think that they want to go into business – but in truth aren’t actually interested in doing business at all. They are simply interested in having their hobby be funded – often to the tune of millions of dollars – and are under the illusion that the “beauty of their fantasy” will be sufficient to create serious revenue.

These individuals aren’t really serious about profit or about improving the lives of others. They are interested in being able to do what they please, and get paid for the privilege.

That’s called… being a parasite.

Oh, they say that they are interested in business, sure – but they are just interested in the cash; not in doing what it actually takes to produce it. Understandable – but no, that’s not how it works. “If I just do things the way *I* want to do them, people will flock to me. They will love me. They will hand over their cash in fistfuls in return for my radiance. Besides, why are you trying to rain on my parade?”

These people are kidding themselves. They probably haven’t even done any market research or a real profitability study.

The Answer: Serve A Need

So there it is: Running your own business is not about getting paid to do your hobby. It’s about providing things that other people greatly want or need – and doing so efficiently, predictably, successfully and profitably. You cannot be completely self absorbed. Remember… in business, it is not about you. It is about your customers / clients.

In business, success is defined as helping others – with systems set up in such a way that a “by-product of profit” is achieved.

People think that being self-employed is about freedom, but remember that there is always a master to serve.

In business, it is your customers – and if you are not serving THEIR needs……. [insert sound of boat sinking]… down you go.