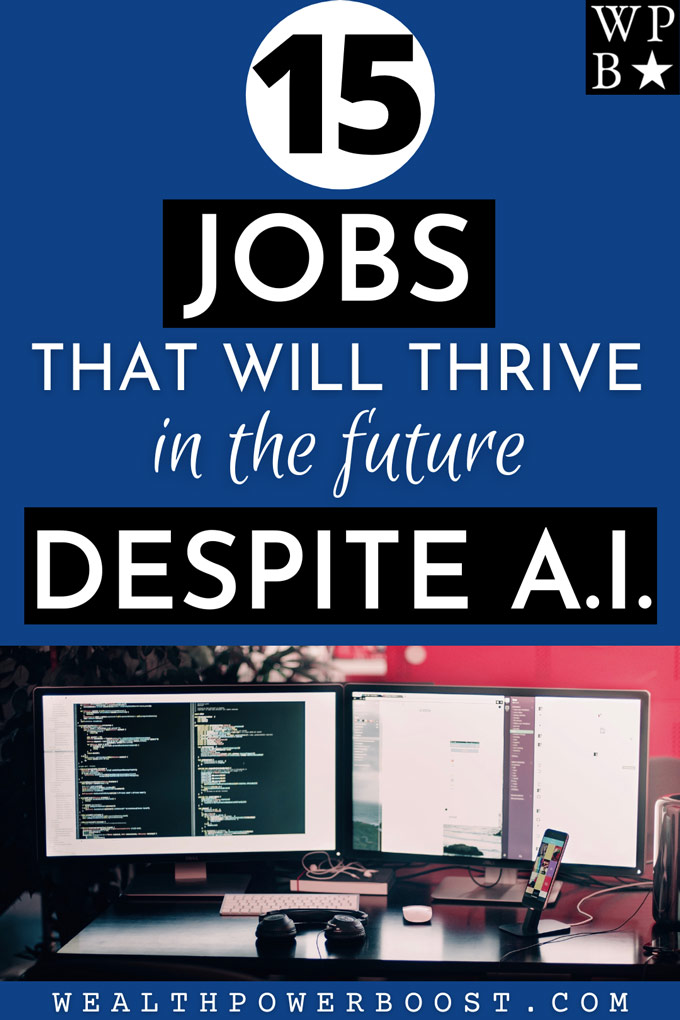 In order to achieve success you have to “skate to where the puck is GOING to be, not where it is right now.”

It is predicted the AI (artificial intelligence) will “wreak havoc” on the workforce by taking over a high number of the jobs currently performed by people. Many people will need to re-strategize and shift careers – however I do not believe that this has to impoverish people.

It depends on you.

AI can be seen as another form of industrial revolution.

During the first industrial revolution, there were actual riots over fears over joblessness and the fact that machines were “stealing” the jobs of people. However it was learned in retrospect that the new wealth created by the new industry led to significant new opportunities. Those who were able to switch things up were able to take advantage of the new opportunities, while those who were most resistant to change fared the worst. The key to thriving – both then and now – is flexibility and being able to adapt.

The science of robotics is gathering momentum and this is one field that is set to continue growing. Robots will build many of the other robots but there will still be hugely lucrative opportunities in this growing industry.

Mining, timber, hemp, biofuels, oil and even asteroid mining are all fields with large and growing potential. All of the new tech being developed requires raw materials. The asteroid mining industry is predicted – ultimately – to be worth many orders of magnitude beyond the world’s current GDP. This wealth will fuel further growth and innovation.

“Big Data” is a field that is only set to grow. The sheer volume of data being collected by computers, smart phones and an ever-increasing array of smart object and smart devices, grows exponentially and with that so does the workload and the opportunities. Big opportunities are predicted in the field of “Rich Data” which means the extrapolation of meaningful insight from raw data.

I am actually really looking forward to this – for obvious reasons: The idea of having a “spare body on ice” or being able to grow new organs which are actual replicas of my existing ones (only in perfect condition!) has great appeal. This technology is on its way – but it might not happen within the lifetimes of those reading this. Bionics is advancing but still has a long way to go before machines can match the complexity of the human body. “Artificial bodies” is considered to be potentially the most lucrative industry of the 22nd century.

This field, on the other hand, is already here and is growing rapidly in popularity and now features professional players, teams, multi-player competitions and international competitions. Esports is already filling arenas – it is growing 50% per year and is predicted to be huge, perhaps even overtaking “real” sports in scale.

Increasing stress and a rapidly changing world is part of what is driving the boom in this field. We live in a reality that is very alien to the one that we evolved in and the adjustment to modern life can take its toll on the mind and emotions. The ‘human touch’ is something that may become even more important in an increasingly technological world as people crave “something real”.

7. Gene Designer For Babies And Pets

“Designer babies” is a field that will start gradually – first with the solving of health problems, however CRISPR technology will inevitably lead to further and further ‘customization’ of the qualities of both people and animals. It will be Pandora’s box for sure but despite the various dystopian scenarios depicted, there may be some very positive results here.

VR / AR design is still a very new field but immersive VR is predicted to become a key technology in the coming decades. As the technology improves, it will gain greater and greater traction. People will choose to interact virtually rather than travel for business. VR is set to become a key part of not only entertainment and social interaction but also has many applications in the workplace.

It is inevitable that this field will continue to grow as systems become more complex and the opportunities for cybercrime grow. Cybersecurity is already an established field and one with huge and long term potential. Data brokerage is interesting – “On average a USA consumer’s data is worth at least $240 per year to companies like Facebook or Google” – that’s astonishing when you consider how many users those platforms have.. and that most people have been obvliviously “giving away” their data for free.

One thing is for certain, humans will always want to be entertained; although it is somewhat surreal to think of robots doing the “important” work and humans reduced to the task of entertaining other humans. However in a world with great technological advances in entertainment, “human” skills such as playing an acoustic instrument will retain their popularity and perhaps gain new appreciation – with rarity enhancing their value. Musicianship, acting and comedy are very human skills and seem far less likely to be replaced by robots than mundane tasks such as doing the dishes or mowing the lawn.

The more people there are, the more real estate opportunities there will be. As the population grows, new housing, agricultural and industrial real estate will be required. Technology will also provide the opportunity to terraform and make habitable areas from regions that are currently uninhabitable – leading to entire new real estate arenas and quite feasibly even entirely new cities.

Energy and materials sciences are booming fields. The battery industry for example has experienced astonishing growth. The amount of energy used per capita continues to grow and is set to continue to do so. Materials sciences are at the forefront of technical innovations, which rely on new advanced materials, making this a potentially incredibly lucrative field.

13. Private Services For The Rich

A huge number of new millionaires and billionaires have been created in the last 10 years and so it should be no surprise that the industry for private butlers, for example, has experienced similarly massive growth. Concierge services that tailor to every whim of ultra-high net worth individuals have also experienced huge growth, as has private security and other related services. New tech will certainly lead to new wealth and opportunities position yourself to catch this additional wealth as it is spent.

This is a sure bet for the future because the percentage of the population that is elderly is going up. People are living longer and so the demand for these services will inevitably grow. People’s expectations with regards to the level of care they require are increasing also – nobody wants to suffer and people are prepared to spend much money in the alleviation of that suffering.

15. “Small Jobs” That Are Not Worth Automating – Yet

Automation will begin in the areas where it is most lucrative, however small niche industries which don’t really meet the criteria for high tech innovation or which demand “the human touch” will continue to prosper. Areas where a personal touch is important will continue to be in demand… at least, until robots are better at the human touch than humans, that is………..

People are afraid of automation as they instinctively feel that it will render them superfluous and out of a job. However people who are at the top of their field will be “safe” for the longest. What will happen is that automation will “weed out” the lowest performers and easiest jobs at the lowest rungs of the ladder and replace them first. High performers will retain their careers.

I am not sure why they did not mention this one but private companies have been making great strides in space development in recent years. Neil deGrasse Tyson, the astronomer, predicted that the world’s first trillionaire would be an asteroid miner; and companies such as Orbital Assembly, Tethers Unlimited, Blue Origin, SpaceX, Virgin Galactic and others are developing infrastructure with a view towards colonization of space and development of industries on the moon, Mars and other planets.

Robots and machines are very good at doing what we instruct them to do, and although they can assist us with data-driven insights and in making accurate decisions, innovation is still a very human activity. Our ability to innovate will always be something special and (for the foreseeable future) will give us an edge over A.I.

The Long Game: How To Build Internet Income That Will Keep Coming In For Life