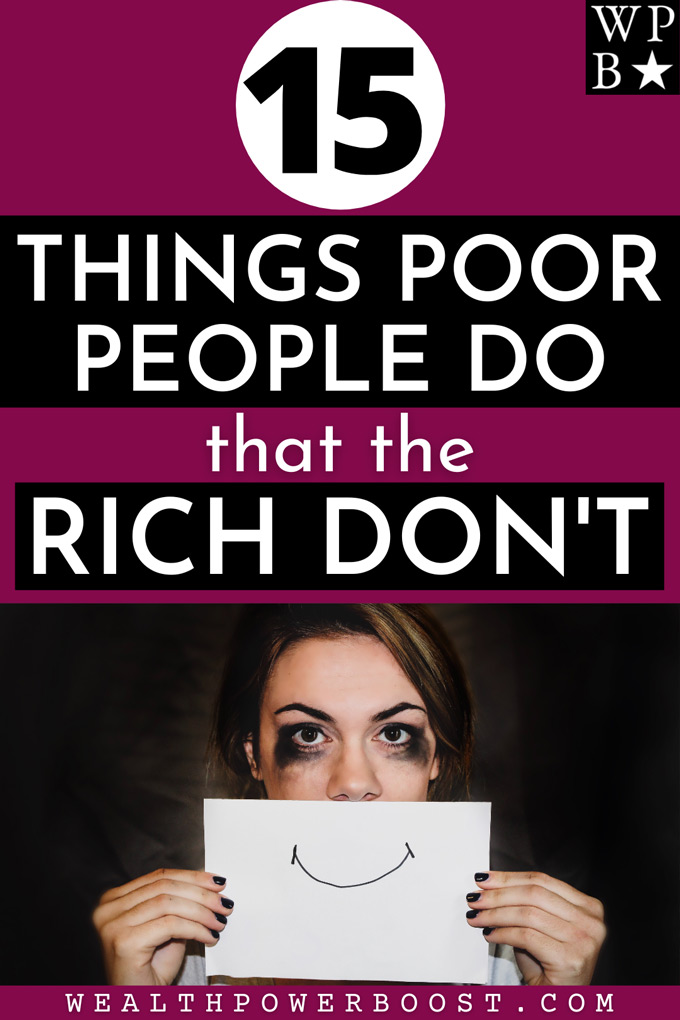 The video above is ALUX’s most popular video with over 7 million views at the time of writing. It’s a bit controversial and certainly doesn’t pull any punches on “harsh truths”. But I think there is a ton of strategic value in this video. Here is their list of the 15 things that poor people do “that guarantees their mediocrity”:

1. Poor people watch a large amount of TV. It’s an absolute waste of time that could be spent building a fortune.

2. Poor people eat junk food. If you are not healthy, all aspects of your life are affected.

3. Poor people shop in “sales” This falls into the category of buying unnecessary “stuff”. Low quality goods also tend to have a shorter lifespan and so need replacing sooner anyway.

4. Poor people get out of bed later than rich people in their younger years. Statistically, it is the truth.

5. Poor people are really into watching sports. It’s escapism and you end up as a “spectator” in life rather than an action taker.

7. Poor people tend to blame others for their misfortunes.. One of the first steps towards wealth is to take responsibility for where you find yourself and hold yourself entirely accountable for making the required changes to your life.

9. Poor people habitually use credit cards and take out loans for useless things. Also known as “Buying things you don’t need with money you don’t have to impress people you don’t like”.

10. Poor people tend to have more children and have them sooner in their life. Another statistical truth.

11. Poor people do not schedule regular checkups with their medic. If you are a high performance person, taking care of your health is not a luxury, it is an absolute essential. A high performance engine requires regular examination and work from a top mechanic. Your body is just the same! It requires top quality fuel only (no junk food, healthy input only), regular check ups and maintenance.

12. Poor people spend money before they have earned it.. This is simple poor money management and leads to greater debt.

13. Poor people habitually surround themselves with other poor people.. It’s a well known saying that “Your wealth is the average of that of the five people closest to you”.

14. Poor people don’t actually follow through on their ideas or potential. If you are not an action taker you will not achieve your goals, plain and simple.

15. Poor people hold the belief that others ought to help them reach the top. One of the hallmarks of success is the removal of any “entitled thinking”. Assuming that life owes you zero and that every step of your success needs to be forged by YOU, is the key. Take total responsibility and make it happen.

It has been observed since very ancient times that the things you habitually do, rather than single acts, are the things that forge you into a person of greatness.

Aristotle observed most excellently that Excellence Is An Art Won By Training And Habituation:

“Excellence is an art won by training and habituation. We do not act rightly because we have virtue or excellence, but we rather have those because we have acted rightly. We are what we repeatedly do. Excellence, then, is not an act but a habit.”

Astonishing single feats very often appear to be the deciding factor in victory but these are typically only made possible by the years of training and acting rightly beforehand.

It is through what we do habitually that the battle is won. It is all in the preparation.

Leonardo da Vinci stated famously in his notebooks that the sure way to evaluate talent was the number of hours focused work a person actually did in a day. This goes against the grain of conventional thinking, which asserts that talent is something completely inborn and that “you either have it or you do not”.

Not so. The great pianist Franz Liszt, argued by many to have been the greatest pianist ever to live, was regarded by the public as a “natural talent”. However it was his passionate dedication to his work that caused him to rise beyond all others. He worked incessantly. He practised up to 12 hours per day. At the peak of his training he did 5 hours of just finger exercises per day – sheer mental torture – in addition to his other training. He even had a “dummy keyboard” fashioned by piano manufacturer Erard so that he could continue to do his finger training while traveling. This was highly advanced and innovative for his day! He had meals delivered to his room so that he could continue working. He practiced late into the night and his neighbors in Paris complained to his landlord, asking to have him thrown out – as he would often play continually through the small hours; improvising endless variations on themes such as the “Dies Irae”.

Castle-owning entrepreneur and tough talking life coach Dan Pena, who has made hundreds of millions of dollars in his life, agrees. He states plainly his belief that it is his excellent habits that are the key to his success. Even at 74, he still works out twice per day, says his affirmations morning and night and continues to work long hours (60-70 hours per week) even though he could retire if he wanted.

But why would he do that? Retire from being a high achiever and then… become a low achiever?

We often see this trait among the wealthy. Oh it is all too easy to say that their greed is limitless and they cannot stop – but perhaps there is more to it. Perhaps they are so habituated towards successful habits that it is totally ingrained and there is nowhere else for them to go. Once you have a taste for victory and success, is it any wonder that you would hate to feel that you are less than you once were?

The Twelve Rules Of Personal Power (Master These To Master Your Life!)

How To Change Your Mental Diet For Massive Success

15 Things Successful People DON’T DO In Their 20s