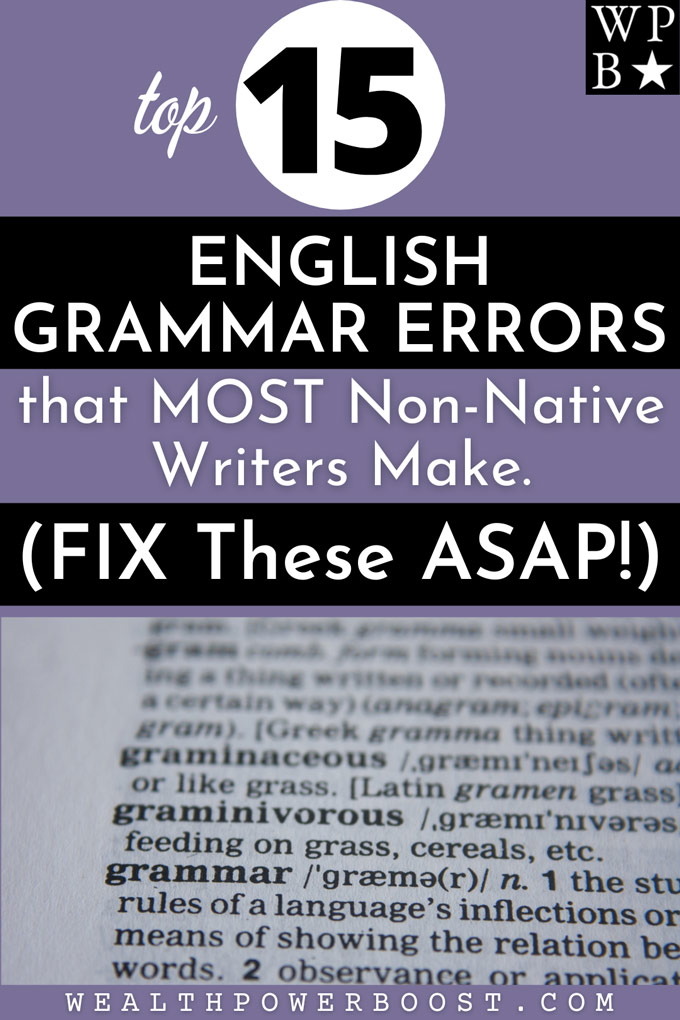 Introduction – Why You Need To Learn This

Why should you listen to me: First, I was taught English in at a top private School in England. Our English education was top of the line. As good as it gets.

Second: I have been hiring outsource writers for almost 10 years and have probably worked with 100 different writers during that time.

I can instantly tell someone has English as a second language BECAUSE of the types of grammatical mistake they make!

That’s not what you want. You want your English reader to think you are a native English writer. 😉 You can do it – but English is a notoriously tricky language with all kinds of annoying rules.

I have proof read thousands of articles submitted by these writers and I noticed that there was a strange pattern – the grammatical mistakes that most of them make are the exact same ones. So here are 15 of the most common grammatical errors I see over and over again.

There are of course many more errors, but fix these first! This article contains some of the most important information you will ever see as a writer of the English language. If you can fix these mistakes, you will automatically be ahead of most of the competition and your writing career will get an INSTANT and very noticeable boost! Not to mention the fact that your resumé will look more impressive!

Don’t forget to tell your writer friends about this article!

Ok, let’s get right down to it.

These are astonishingly common and are a terrible error that IMMEDIATELY shows you to be a non-native English writer.

Particularly common is the confusion between it is and they are.

When the subject of the sentence is one thing only = use “is”.
More than one thing = use “are”.

Juice recipes have become so popular because of its refreshing quality and raw food nutrients.

Carrots are jam-packed with nutrients that provide a wide array of benefits. Its high concentration of beta-carotene may also be helpful in relieving rheumatoid arthritis

Lavender and coconut are essential oils that is effective to get rid of fleas and ticks.

Juice recipes have become so popular because of their refreshing quality and raw food nutrients.

Carrots are jam-packed with nutrients that provide a wide array of benefits. Their high concentration of beta-carotene may also be helpful in relieving rheumatoid arthritis.

Lavender and coconut are essential oils that are effective to get rid of fleas and ticks.

2. Could, Would and Should

Could, would and should are conditional and need a second clause in order to define the condition under which the thing could, would or should happen. i.e.

“The newer models have added sails, a shovel arm which could toss sand, and pneumatic power which used fan-like blades that could pump air into plastic bottles for pressurized storage.”

I could go shopping, but you would need to lend me some money.
I should phone my mother, but I am busy.
I would have gone to work today but I had a headache.

If the statement is NOT conditional and has no further requirements in order to be true, use can instead of could, will instead of would and shall instead of should.

Note: Could also has a further possible use; that of indicating that something is one of two or more possibilities. For example:

I have examined the gemstone. It could be a ruby. However, it could be fake and I should run more tests before making a conclusive statement.

These words are prepositions and are very often confused by non-native speakers. When using IN or ON to describe the POSITION of real-world objects in relation to each other – just ask yourself “is it INSIDE or ON TOP OF”

Remember it this way:

Food goes in your stomach. A butterfly lands on your stomach.
Dinner goes in the oven and then is put on your plate.
A man drives to work in his car.
After driving down the dirt road, there was so much dust on the car that it was hard to see what color it was.
Documents go in folders.

When I am at home I like to stare out of the window, instead of writing articles.

When it comes to the internet or media presentations, these can be confusing. Think of the ‘surface layer’ that is visible to the consumer as “on”, whereas the ‘internal workings’ should be described using “in”.

What’s on television today?
I am skilled in WordPress and Social Media Management.
I have knowledge of WordPress.
I saw a video on Youtube.
The day’s news can be found in the newspapers, but the most important story will be on the front page.
I saw today’s stories on a news website.
Google is the most popular website on the internet.
Articles are uploaded to WordPress.

Stuffs is a verb, meaning that act of stuffing.

To describe a random collection of items, you should say “stuff” or “things”. Never stuffs.

I need to go home and get my stuff.
The party was great. But the next morning, when I looked in the fridge, all my beer was gone and so was all my other stuff.

I am not skilled with those kind of stuffs.
I need to go home and get my stuffs.

Their = possessive = belonging to them. i.e. They went into their house.
They’re = shortening of “they are”. i.e. They’re going to watch the football game.

Your = possessive = belonging to you. i.e. You went into your house.
You’re = shortening of “you are”. i.e. You’re very good at grammar.

Already… This is a word that is almost always misused in the Philippines, especially. It should ONLY be used when something happens sooner than expected.

You should buy new shoes when your pair is already worn out.
(In this case, simply omit the word already and say “when your pair is worn out”.)
I got a card that transfers paypal funds in real time and without any fees, so for my next payment you can already send it there. (Again, just remove the word ‘already’ to make it correct).

Hello, I have already finished the work. (when it is NOT sooner than expected or requested)

7. Result In, not Result To

It is always “result in”.

Poor use of this preposition results to a lower quality article.

Poor use of this preposition results in a lower quality article.

In the English language, there is no such thing as “sunburns”. The word is always “sunburn” (singular) because it is the name of a condition – like flu, colitis, dandruff etc and so has no plural form.

9. Everyday or Every Day?

Another grammatical mistake that non-native and many native English speakers make: “Every day” vs. “everyday”.

You should brush your teeth every day.
The sun rises every day.
Grammatical mistakes are an everyday occurrence.
I drink tea every day
Tea drinking is an everyday practice. (See the difference?)

Some people are not happy with President Trumps policies.
My house has a large number of lamp’s.
They were so close together that their bodys touched.
Herbal remedies may affect the bodys immune response.

Some people are not happy with President Trump’s policies.
My house has a large number of lamps.
They were so close together that their bodies touched.
Herbal remedies may affect the body’s immune response.

I walked down the road to catch a bus which was late because the driver had a stomach ache caused by eating junk food that was prepared by someone who didn’t wash their hands.

I walked down the road to catch a bus. However the bus was late because the driver had a stomach ache. His stomach ache, incidentally, was caused by eating junk food that was prepared by someone who didn’t wash their hands.

This is a tricky one. In the English language, there is more than one way to use the past tense (describing things that happened in the past).

For example, you could say

I did it (“perfect” = basic past tense) – describing an event that happened at a specific time.

I have done it (“present perfect”) – describing something that was done at an UNSPECIFIED TIME in the past. Full tutorial https://www.englishpage.com/verbpage/presentperfect.html

I was doing it (“imperfect”) – describing the past but referencing a continuing action rather than a completed one.

I had done it (“past perfect”) – denoting something already done before something else that is also in the past. “By the time the bell rang, John had already gone home.”

These all have slightly different meanings.

I am once an Editorial Writer at high school and won a writing award.

I WAS once an Editorial Writer at high school and won a writing award.

The English word “experience” has several subtly different meanings and the usage is different in each case.

1) “An experience” is an EVENT with unusual or remarkable qualities. Treat as a noun. Examples – “I had a religious experience.” “That roller coaster ride was quite an experience.”

2) Experience is a QUALITY; the quality acquired when a person has done something numerous times and gained some valuable proficiency or insight. Example – “For this job we are looking for someone with experience.”

I had an experience as an ESL teacher at UV MTM ESL ACADEMY.
I’ve had an Experiences in WOO-commerce, Linkedin, On page and Off Page SEO.

There is NO SUCH THING AS “FLOURIDE”

The correct spelling is Fluoride.

If I had a dollar for every time I have corrected this mistake I would be on a beach somewhere, not here at my desk. Fluoride! It’s not that difficult.

Ok that’s it! 🙂 Don’t forget to link to this post so that other writers can up their game.

Top 26 HIGHLY PROFITABLE Blog Niches (Plus 11 You Should AVOID At All Costs!)

How To Outsource And Grow Your Business Exponentially (FREE Tutorial)